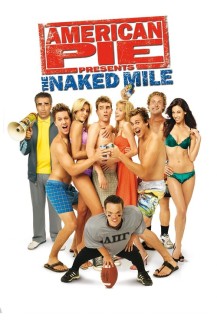 So, the Franchise continues, and it moves into full focus on the Stifler family.  Not the Stiflers we know and put up with…but Steve and Matt’s cousin Erik (John White).  Erik is trying to get his girlfriend Tracy (Jessy Schram) to give up her virginity.  But Erik  has a problem.  He is not a total jerk like his cousins.  He actually likes his girlfriend.  But not so much that when she gives him a free pass for a weekend he does not refuse to take advantage of it.

He and his buddies are about to graduate so they go to visit a college campus.  There they hang out with Erik’s popular crazy Frat living cousin Dwight (Steve Talley).  They stay at the Beta House, meet women and have all sorts of shenanigans culminating in the Naked Mile.  Which was started decades before as a form of protest by Jim’s Dad ,Mr. Levenstein.  He still runs it, but now it is an excuse to see attractive women run the campus naked and have a huge frat party afterwards.

Which all leads to Erik realizing how much he loves Tracy and does not care if she is not ready to have sex.  He is totally cool with waiting if that is what she needs.  Don’t worry, his new found respect won’t have to hold out long.  Because in the American Pie Cinematic Universe, as soon as you realize that sex is not quite the thing you made it out to be, you have cracked the “Get Sex Code”.

The thing is, the goal of Stiflers is to be complete jerks and this switch to focusing on them over relatives of, say Jim and Michelle or something means the film lacks heart.  The purpose of most of the women are to be hot objects.  They seem to have no actual goals or personalities beyond being “sexy and free” to high school kids visiting college.  And I am pretty sure that no actress with a no nudity clause got through.  The Guys pretend to be naked, but the women do not even get the benefit of creatively hidden but implied nudity.  This is because many of the jokes surround things like seeing a running girl’s breasts bouncing.  That is the level of humor in the film, which, may surprise some to learn is below the standards of the franchise.  In the early films, they were at least attempting to be clever with the sex jokes.

The film embraces the biggest problems of Band Camp.  The raunchiness is unpleasant and does not result in anything resembling humor.  The film has no true heart or center. Director Joe Nussbaum had a hit with a short film called George Lucas in Love, but manages none of the originality in this film.