What a Scrooge Part 2 (an American Christmas Carol, 1979) 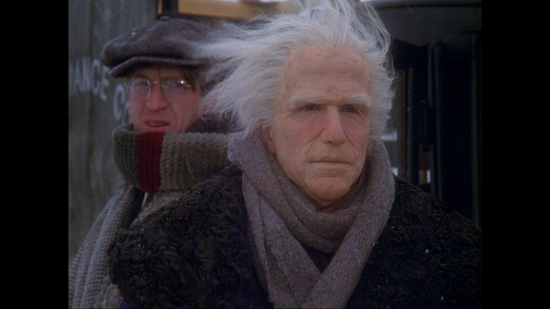 On Christmas eve, after taking many people’s things, his employee Thatcher tries to convince Slade to invest in reopening the local quarry. Slade repays Thatcher by firing him.  Alone in his warehouse, slate starts to read first addition of Charles Dickens a Christmas Carol. He scoffs at the book and tosses it aside.

He startled when the sudden storm brings his long dead partner Latham.  This is honestly one of the most uninspired introductions of the Marley role that I’ve seen in any of the versions of a Christmas Carol. The character lacks any urgency and would not inspire the terror he should.  He politely explains how to Slade. There are no chains and nothing seems to bind him at all, and he doesn’t even seem troubled by his situation.

And that seems to be the problem with much of this production. The ghosts are all kind of bland and personality free.  The ghosts are not unique individuals, but rather take the form of people from home he has repossessed items.

On the other hand, I can say that Slade is a very well realized version of the Scrooge character. He truly embodies a character who believes that the miserly way is the best way.  Early in the film, he gives orphans a gift… sheets of paper that tell them all about famous people who pulled themselves up by their bootstraps and me money without help from anyone. The irony of coarse, is that he has done no such thing.  He was given his opportunities by others.  He too was an orphan in need.

While well-meaning as an updated version of the Dickens tale, over all this film falls flat and is fairly forgettable.