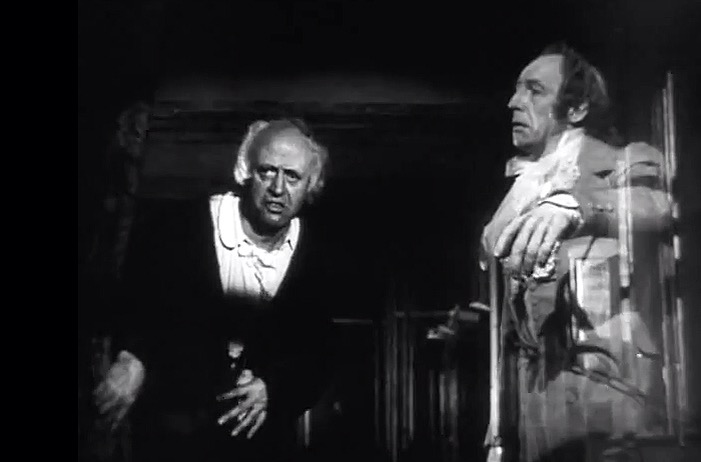 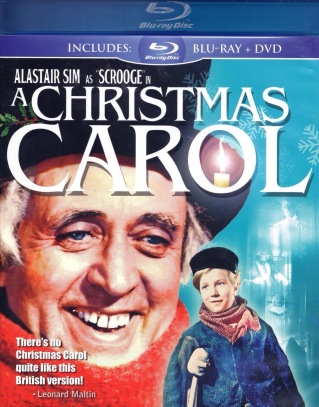 I am starting with the 1951 version starring Alistair Sim. The DVD menu says it is called a Christmas Carol, but the title cards of the film (and host Patrick Macnee) call it Scrooge. It starts out with the familiar voice-over telling the viewer that Marley has been dead for seven years. Sim’s Scrooge is accosted by a debtor outside the exchange. This is a departure from any film version I have seen. It moves quickly to introduce our important characters, such as Bob Cratchit and Scrooge’s nephew Fred. We also see Tiny Tim (who is not so tiny) and his mother walking past store fronts.

As Scrooge sits to eat his meal, he starts to hear bells ringing (the filmmakers take the time to show us the various bells, but they are not moving as they ring. I am unsure if this was intentional, to make it creepy or just lazy). But the door slams open and in walks Marley (Michael Hordern). Or rather, he fades in. I didn’t find this to haunting, although, the sequence ends nicely as Marley Opens a window to show Scrooge multitudes of torments spirits trying to help a poor homeless woman, yet unable to intervene. For the limited effects of the time, it is a powerful moment.

In a rather interesting choice, the Ghost of Christmas (Michael Dolan) is an older man. I note this because most portrayals are of a younger woman, or a young androgynous male. In the longest segment of the film, Scrooge visits his school briefly, only seeing himself on the day his family takes him home. The older Scrooge sees his sister Fan (Carol Marsh) and instantly is overwhelmed with joy-only to face disappointment as she passes through him. The Ghost then leaps to the Fezziwig Christmas Party. Unlike most versions of a Christmas Carol, the Ghost leads Scrooge through much of his past, including his first meeting with Marley. Young Scrooge (George Cole) is more generous and a romantic, especially under the leadership of Fezziwig. However, he is swayed by his desire to not be poor, soon accepting work with Fezziwig’s competition. This is where he meets Marley (Portrayed as a younger man by Patrick MacNee of the Avengers). The film follows Scrooge to the death of his sister Fan. There, the younger Scrooge is so bitter at her dying, he leaves the room, never hearing he dying request that he raise her newborn son, Fred. This causes Ebenezer to break down, weeping and begging Fan’s forgiveness. We also see Marley and Scrooge taking over Fezziwig’s business. Then we see Scrooge’s beloved, Alice (Rona Anderson) setting Scrooge free to pursue money.

The Ghost leads Scrooge to a point in his later years when he and Marley take advantage of the dishonesty of their boss (who has been embezzling the company into bankruptcy) to get control of the company. Finally, the Ghost brings him to Marley’s death bed. There, Marley tries to warn him, as he does again seven years after his death. It’s an interesting mirror as Marley tries to tell Scrooge to change his ways before he dies.

Scrooge is next called upon by the Ghost of Christmas Present (Francis De Wolfe). Unlike the previous Ghost, he is not transparent, and he seems younger. He is fairly jovial at the start, but once he starts to lead Scrooge around, he becomes more somber, lest bombastic. He leads Scrooge to Cratchit homestead, where he witnesses the joy within this family he has given little thought to. As Scrooge’s heart warms to the family, he asks about Tiny Tim. The Ghost confesses, rather somberly, that he sees an empty chair and an unused crutch next Christmas. As Scrooge laments this news, the Ghost quietly ridicules him, using word from Scrooge’s own mouth about allowing some to die-to decrease the surplus population. Scrooge is visibly stung by this. He is then taken to see his nephew Fred. Ebenezer is clearly seeing his nephew anew. Finally, the Ghost brings him to a shelter, apparently run by Alice, you see Scrooge light up as he sees her. Yet, Scrooge is uncertain…he is old…what good can he do now? The Ghost takes his leave. Ebenezer starts to run down the snowy streets, only to be stopped by a cloaked figure.

We see little of the Ghost of Christmas Future, besides a black cloak, that covers the spirit from head to toe. We see a human hand, but little else. The Ghost brings Ebenezer to a pawn shop, where he sees his housekeeper pawning off his valuables, along with the undertaker and another woman. All laugh and cheer the death of Ebenezer. When he is finally brought to his grave, he breaks down, unable to take anymore. He begs for mercy, asking how he can change, he is but an old man, it’s too late. And suddenly, he finds himself in his bed. Scrooge steps out of bed, as his house keeper enters the room. Scrooge asks the day, and is elated to discover its Christmas. In this sequence, Sim plays Scrooge as if a giddy drunk. He cannot contain his joy, and instantly gives his house keeper a raise. She, of course, is terrified he has lost his mind. But he assures her he is simply a new man. And he’s thrilled by it. He secretly sends a prize turkey to the Cratchit family. Young Tiny Tim, in this version deduces that it was Scrooge, which feels a little overly silly, because his reasoning is, “I don’t know how I know, I just feel it.” However, making up for that is the heartfelt moment when Scrooge apologizes to Fred’s wife (Olga Edwardes) for being so foolish towards her and Fred. It’s a very touching scene. Alistair Sim’s best performance in the film is at the end. He can’t contain himself, and it’s enormously contagious as the film closes.

It is interesting how much back story you get on Scrooge in this version, the majority of the film is spent with the Ghost of Christmas Past. The Ghosts are also quite gentle and non-threatening, even Marley is not fear or awe inducing. But the film still works on the strengths of it’s actors. Also worth noting is the music. It makes heavy use of traditional Christmas songs, especially “Hark the Herald Angels Sing” and “Silent Night”. Hark the Herald Angels Sing is even incorporated into the haunting score during the opening credits so that it flits from a choir singing the carol to a thundering symphony playing an original score.