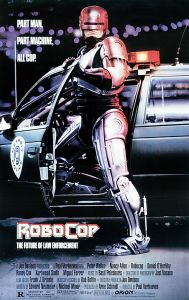 Usually, to refer to a movie as a comic book movie is to suggest it was based on a specific comic book. There was not a Robocop comic when the film came out (although, Marvel quickly adapted it into an ongoing series). But Robocop had all the markings of a good super-hero comic. A noble lead who suffers tragedy and is reborn with great powers, forced to rediscover who they are, all while fight nefarious villains. It’s also Paul Verhoven’s one great film.

Spoilers are all over this…so if you have not seen RoboCop, but think you would like to someday? You might not want to read this.

Robocop is set in a near future that seems scarily possible. Crime is rampant in Old Detroit. Companies like OCP (Omni Consumer Products) now have contracts with the police dept effectively privatizing the police force. The villains of the film fall into two groups. There are the bottom level drug dealers, thieves, murderers and rapists…and then there are high rise occupying corporate men and women. The central villain is Dick Jones (Played with malice by Ronny Cox), the second in command at OCP. After his failure with his ED 209 Urban Pacification Unit, in swoops younger go getter Bob Morton (Miguel Ferrer). Bob has been working on the Robocop plan, and has the opportunity to pitch it to “The Old Man” (Dan O’Herlihy). 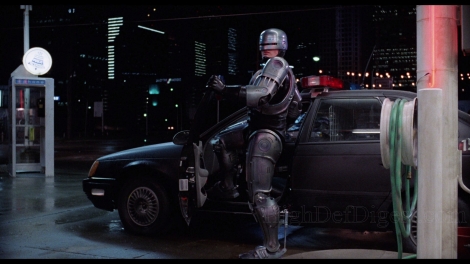 Peter Weller is able to convince us in a few short scenes that Alex Murphy was a decent, generous father, husband and cop. He loved his family and was devoted to his job. He also seems to get respect quickly from his sergeant (Robert DoQui) and his partner, Officer Lewis (Nancy Allen). In just a few minutes of screen time, he manages to make Murphy matter enough that when his inevitable death occurs at the hands of low life sleaze Clarence Boddicker (Kurtwood Smith) and his gang, it’s downright painful. Granted, part of the reason for that is that Verhoven is so graphic in the film’s violence. However, for the most part, the graphic violence feels justified within the context of the story.

So, by dying, Murphy “volunteers” for the Robocop Project. This leads to a nice series of shots all from Robocop’s perspective as he is being built. This lends a nice air of mystery as you wait anxiously to see the final look of Robocop. Even when he is finished, you don’t get a good look at him as he enters the police station. When he is revealed, the transformation is surprising. You barely see the man and Weller moves like a machine in an extremely convincing manner.

This all leads to a nice series of scenes where Robocop saves people. An interesting moment is after stopping an attempted rape, the victim hugs him and is thanking Robocop…but Robocop has no emotion about stopping the crime, it’s simply what he is programmed to do. He starts directing the victim to a local rape crisis center in a cold, uncaring tone.

But as OCP has tried to suppress the man, Murphy seems to fight to be free. Nightmares of Murphy’s death jar Robocop from his “sleep”. Lewis is the first to recognize the man. And it’s her questions that trigger Robocop to search his own history. In one scene, Robocop asks Lewis about “Murphy’s” family. Murphy is the other. He is not Murphy. After she explains to him what became of his family… Robocop quietly notes that he can “feel them, but I can’t remember them.”  There is a tone of mechanical desperation in that line.  He can process there is something there, but his programming cannot connect with what is missing.

Robocop runs into a member of Boddicker’s gang, which triggers a curiosity.  Robocop needs to investigate who killed him. This film is focused on Robocop uncovering the mystery of how he died, but then who he is, and how to regain what he lost.

Robocop’s effectiveness is in its characters. The villains are despicable, the heroes noble (but flawed). One of my favorite characters is Sergeant Reed, a passionate leader in his precinct. He will not stand for talking of a strike, he is a police officer, and that is a noble profession that can’t just go on strike. He quickly seems to accept Robocop as an officer, not merely a machine. On the other end of the spectrum is Kurtwood Smith who plays Clarence Boddicker with such evil glee, you almost like (and totally hate the bastard). Nancy Allen plays Lewis as a confident, bright and headstrong officer. Ronny Cox is so calculated and heartless in his portrayal of the power hungry Bob Jones, you hope for a worthy demise (and yeah, it’s “worthy”).

And again, Peter Weller? The suffering he must have endured in that suit never shows. Instead, he moves in such a way that you can often forget there is a man beneath it, I can’t recall a moment where he slipped up. And yet, he manages to bring a warmth to Robocop as his self realization grows.  His movements are machine, but he becomes a man at heart.

I had mentioned this as Verhoven’s best film, and I stand by that. Often, his desire to shock with copious amounts of violence and nudity result in a rather flat story. And often, the themes he says he wanted to explore are barely touched upon at all. But in Robocop, his social commentary and satire on our consumerist and corporate culture pretty much hits every mark with great accuracy.

Robocop has managed to remain relevant and be entertaining even 28 years later.