My short reaction to the newest Terminator film is that I did enjoy it. It had some good jokes, Arnold’s aged Terminator was a fun take, while feeling familiar. I thought Emilia Clarke did pretty well taking over for Linda Hamilton. Plus J.K. Simmons! 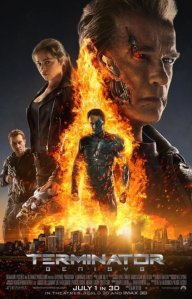 The cast is fun to watch, the effects are good.  And hey, that twist might have felt more crazy cool had it not been revealed in a trailer a few months ago.

I liked the numerous visuals clearly referencing the previous films.  Little moments meant to evoke the emotional beats of previous films. I was surprised that Arnold Aside, they simply recast characters from the first film.  I expected digital trickery on that front.

That said, do not try and figure out how it all fits. Trying to do so reveals that the film is a real mess.  Truthfully, this franchise is a mess made worse with each film. It does not fit, even though they clearly intend it to.  There are some pretty big questions raised.  One is, if Sarah and Kyle have sex and make a baby in 2017, it would simply be unlikely that it would result in John Conner.

The film feels like it was simply built from a series of sessions of people sitting around saying, “Wouldn’t this just blow the audiences’ minds?!”  In a fashion, a lot of the stuff will, but not in a good way.  Attempting to put it all together nearly gave Entertainment Weekly’s Darren Franich an aneurysm.