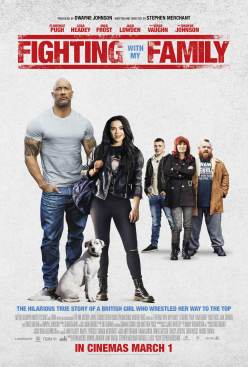 Fighting With My Family is the story of wrestler Paige.  Coming from a lower class family obsessed with wrestling, Zayara and Zak dream of the big time wrestling.  When they try out for WWE, only Zayara is selected, crushing her brother.  But when she tells him she won’t go, he lets her know he cannot take this away from her.

And so, Fighting With My Family takes us on Zayara’s journey to becoming the WWE Diva Paige.

As someone who has little knowledge of Wrestling beyond knowing who the Rock is, I cannot verify the accuracy of the film.  What I can confirm is that this is a fun film with a lot of heart.  Florence Pugh is incredibly sympathetic and lovable. The film does not make her pure of heart, she learns some hard lessons, like not seeing the other women as enemies.  As she grows, she pulls others with her.

The relationship that becomes most strained is Paige and her brother Zak.  He struggles with the idea that he cannot be where she is at.  And it drives him away from everything good in his life for a time. The Rock is charming as usual.

This is a good little inspirational sports film worth a watch.