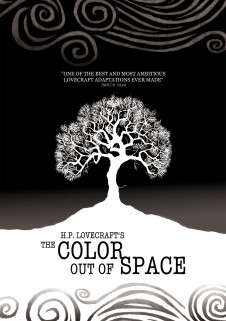 A young man goes to a small town in Germany in a search for his father.  His search for the truth leads to the discovery of a meteorite that landed years before and corrupted the land.

This is mostly a german language film made on a small budget.  What really makes it stand out is the visual choices the filmmakers have chosen. It is primarily presented as a black and white film, giving a feeling of desolation to the film.

But when things start to fall apart, we are introduced to a neon violet color that pops beautifully against the stark black and white.

The visual spectacle is what really makes the film interesting, and it definitely is a visual treat.