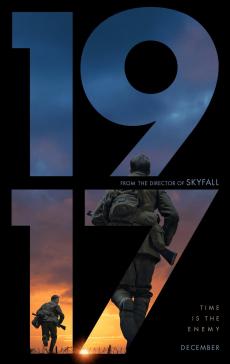 Honestly, the trailers for 1917 did not really grab me. War movies are not something I tend to get excited for. But then, I saw all the talk from people whose opinions I trust that it is a must see film, and more importantly worth seeing in the theater.

So, this weekend, I finally got the opportunity to sit down and watch the film in my local cineplex.  I tried to avoid getting my hopes set too high.

And I tell you this much…the film was amazing to watch.  By now, it is pretty well known that it is set up to look like one long and continuous shot, following two young soldiers in World War One given the mission to cross the German front line to warn a general that their planned attack needs to be halted, as it is a trap.

This is how you use a gimmick to tell a story. We stay with soldiers Blake and Schofield as they make their way through the treacherous landscape, which means we never see the dangers or threats until they come upon them.

Blake is more idealistic than Schofield, but both clearly struggle with the weight on their shoulders, the burden of the war.

While the whole film is impressive, the sequence that really blew may away is the night time sequence. Often we only see from the light cast by fires and explosions and flares. This creates a moment of great uncertainty and beauty as the scene brightens and then shadows rush over the landscape.

If you have not seen 1917 yet and it is still at your local theater? Check it out.  It is worth seeing in the theater.