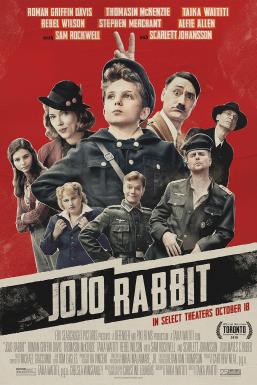 Jojo is a young boy living in Hitler’s Germany.  He aspires to be a great Nazi, to the point that the ten year old’s imaginary best friend is Adolf Hitler. After getting wounded at a Nazi gathering for Hitler Youth, these hopes are dashed. Instead, Jojo has to stay behind and support the Nazis through canvasing with propaganda.

But his life takes an even bigger turn when he discovers his mother is helping hide a young jewish woman named Elsa in their house.

Jojo Rabbit is a fascinating film.  It delivers lots of laughs, of course, in part due to the fact that it falls into a long history of presenting the Nazis as buffoons. Sam Rockwell is the disillusioned military man who has lost his faith in the cause of the Nazi regime. Rebel Wilson is the more devoted but goofy (at one point telling the kids at camp she has had eight babies for Germany).

Scarlett Johansson turns in a solid performance as the rebellious mother of Jojo, who hides her activities from Jojo to protect both him and herself.  She loves her son deeply, and hopes to turn him from his being a Nazi back to her son…a little boy.

Taika Waititi plays Hitler.  And he pulls off a stunning transformation. Early in the film, he is funny and almost sweet. When Jojo is humiliated by some older boys at Nazi Camp-giving him the Rabbit Nickname- Adolf tells him what a brave and noble animal a rabbit is. But as a friendship with Elsa grows, Hitler starts to become more menacing. He is really the dark ideology Jojo clings to, and as Jojo finds himself questioning it, the poison festers and fights to maintain dominance.

Roman Griffin Davis gives a great performance as young Jojo.  He has a sweetness that seems to conflict with his belief in the Nazi ideology, and ultimately, that nature starts to assert dominance. He also has a wonderful chemistry with Thomasin McKenzie. At first, she is abrasive with him as a survival tactic, but more and more their walls break down for each other.

Truthfully, the trailers did not prepare me at all for the film.  Because, yes, it is funny. And it challenges the viewer with uncomfortable moments. But it also is heartfelt and hopeful. And Heartbreaking. There are gut punch moments I was not anticipating. The film is unafraid to acknowledge the horror and evil of the Nazis, even while laughing at them.  And, maybe that is how it should be?

While Todd Phillips complains that comedy is too hard in today’s environment… Taika Waititi on the other hand makes a film that has laughs and heart. It has moments of raw and painful emotion that gets at the center of our conflicts and growing past our ills. Jojo Rabbit looks at us at our darkest and dares to call for hope. It calls on us to dance.