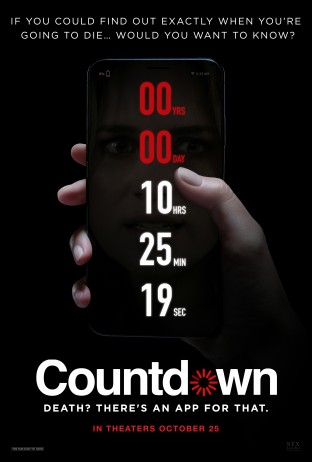 People download a new app that predicts the time of your death. The thing is, people who get information regarding an upcoming date, end up dead. Nurse Quinn Harris downloads the app and finds out she has about two days to live. She and others with short time frames team up to try and beat the app.

Countdown is sort of like the Final Destination films, though without the elaborate death sequences. And, really, this is a reasonable idea for a horror film. I kind of like the idea that people start seeing a grim reaper like figure as they get closer, which has shades of stuff like the Rings films.

Another thing I liked was how the story played on our habits of just agreeing to terms of service.  At the same time, there is a bit that just seems like overkill.  For seem reason, they included a mythology where you can break the terms of service.  But the thing is? Breaking the terms of service does not actually change anything.  Your countdown still continues. It feels like breaking the terms of service should cause instant death or something. Instead, when people change plans for the date of their death, apparently that breaks the service. Why? Even though the movie gives an explanation, it seems pointless. If avoiding your death means you still die right on time…what does it matter?

Ultimately, Countdown is passable Halloween movie entertainment…but is, in the long term, a forgettable film.