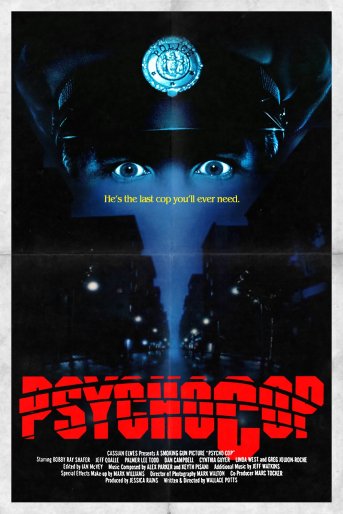 A year after Maniac Cop hit screens, we were greeted by yet another killer cop.  The titular Psycho Cop is Officer Joe Vickers. A bunch of disposable kids go to a remote house to party and get picked off one by one by Vickers.

There is not a lot to say here, the film is not all that special. It follows the standard of the wise cracking killer. The kills are not terribly unique. The dialogue is pretty standard.

Vickers is a servant of Satan, out killing people for sacrifices, but it does not make a lot of sense… his victims are people being punished for transgressions, would he target the innocent? Why does he care if people are misbehaving?

Truthfully, the only memorable part of the film is Robert R. Shafer, who is pretty obviously having fun with the role. But this is not a memorable slasher at all.