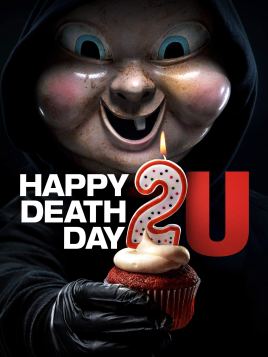 So, Happy Death Day had a pretty simple premise.  Groundhog Day with a serial killer.  Tree woke up on her birthday, is killed by a serial killer. She had to solve the mystery of the killer and become a better person. She succeeded and the loop was over.  Until now…

Happy Death Day 2 You opts to explain what actually caused Tree’s time loop. The result is a change to the film…rather than being horror Groundhog’s day, the film goes on a sci-fi bent involving parallel universes.

The cause of the loop is a science experiment being conducted by students.  When the time loop begins for Ryan, Tree and Carter to help him close the loop.  But in the middle of their attempts, the Dean interrupts and the end result is an explosion.

Tree wakes up to find herself in her original time loop…or so it seems.  She discovers that there are many subtle differences…and at least one that makes her hesitant to return to how things were.

I liked this part a lot, as Tree finds herself torn between her family and her boyfriend Carter. The cast is enjoyable, and I generally liked the characters. The film has some good twists on events and characters in the previous film.

While I largely enjoyed the film, there was some problems.  Even though the previous film established that each time she dies and returns, she is weaker…and one too many deaths, she may not wake up again.  However, while this plays a role somewhat late in the film, Tree has a montage of “wacky suicides”. This borders on slapstick (and one death borrows directly from Groundhog’s Day) to the point of ruining the tone.

Also, the final tag of the film during the end credits seems unnecessarily cruel.

But I largely, as with the first film, enjoyed this one.  And the switch to sci-fi is a pleasant surprise.