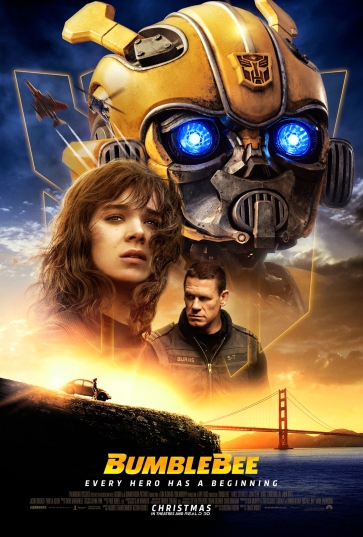 It is Charlie’s 18th birthday. And Charlie feels out of sync with the entire world. It seems her mother and brother were able to move past the death of her father. She had no friends.  The rich snobs mock and bully her. All Charlie has is her car. Which does not work. A project she had been working on with her father. And she cannot even make it work.

But on her birthday, in her Uncle Hank’s junk storage she finds an old VW Bug.  She tries to bargain with Hank, but he simply lets her have it as a Birthday gift. After getting it home, She makes a discovery about her car.

Bumblebee has always been one of the big favorites of the Transformers for the audience. He is easily one of the most likable parts of the live action franchise (in spite of some rather “ug” moments) and so, it makes sense to put him front and center.

This seems like it should have been destroyed by fatigue of a franchise that has never been particularly good.  But against the odds, the trailers actually got even jaded fans kind of hopeful.

What we have gotten is a movie about a robot that transforms into a yellow VW Bug who is befriended by a heart broken young woman.  And…

It works.  It works really well. Charlie is sympathetic in her sullenness. She does not simply lash out angrily. She just cannot understand why it seems like the rest of the world has found it so easy to move on, when the death of her father seems so insurmountable.  Her family is not terrible.  Really…they are painfully awkward.  But they are trying.  Memo, the young man who is crushing on her is actually a real welcome change of pace for this franchise. It is not that he is super competent.  But he is brave, funny and kind. Cena’s military man is a balanced take. He is a good guy trying to make the right decisions(and the lone voice of reason when the Government considers working with the Decepticons).

The friendship of Hailee Steinfeld’s Charlie and Bumblebee is really sweet and charming.  There is just a goofy wholesomeness there that is really endearing.

I think this film has the best designs of the franchise. The Bay films have been painfully busy and confusing.  Here, they have opted for looks more in line with the 80’s cartoon and toys and the result is beautiful and clean.  The film makers commit to their late eighties setting by including a nearly constant barrage of 80’s classics.

Along with heart, the film has real humor.

I used to say that the first Michael Bay Transformers film was probably about as good as you could hope for when it comes to a movie about giant robots that turn into cars.  Turns out, I was wrong.  Six movies later, we get the best Transformers movie.