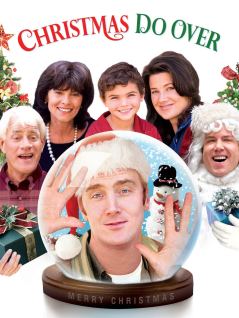 Kevin is in a miserable place. His rock star dreams never panned out. His marriage collapsed, his former in-laws hate him and his son does not yet see what a lousy dad he has. He barely plans for a Christmas gift for his son and on Christmas Eve, he does anything he can to avoid participating.  When his son makes the wish that everyday could be Christmas, Kevin pays the price…

Kevin finds himself restarting Christmas Eve over and Over.  The film follows a very specific (and familiar template). First Kevin is confused and each day goes very badly for him. Then he starts to put the things he witnesses to use. He tries to scheme his way through things. This actually is played largely for comedy…especially how he works hard to undermine his wife Jill’s new boyfriend Todd. Honestly, this goes on so long it almost had me concerned he might get rewarded…but the film actually addresses it when one of Kevin’s attempts to escape the loop result in him realizing Kevin is actually a good guy who makes Jill happy.

The film is actually largely entertaining. Jay Mohr always makes for a good ass. Daphne Zuniga plays Jill, and is quite sympathetic. And a lot of the scenes of Kevin trying to scam the system are funny. And there are even some genuinely sweet moments as Kevin starts to see how badly he screwed things up.

The film has a small but good cast. The frustrated in-laws are played byTim Thomerson and Adrienne Barbeau. Ruta Lee is amusing as the heavy drinking Granny (let us ignore that she is only about ten years older than either Barbeau or Thomerson)…the one family member outside of his son who still likes Kevin.

The biggest pill of the film to swallow is, funny enough, not the concept. Instead, it is the ending. The ending is wrapped up in seconds, tosses characters aside for an unearned “Hero Gets what they Want” end. Instead of working within the framework of the lesson he learns, meaning he simply needs to accept the consequences and be the better man he learned to be? It gives us a less than five minute “Everything is fixed” ending. Very disappointing for an otherwise light and entertaining holiday movie.