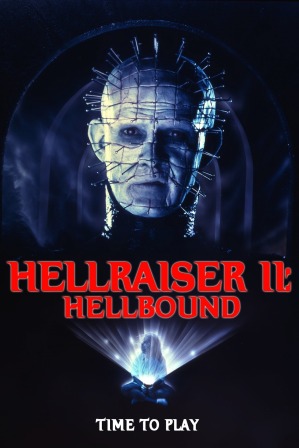 Hellraiser: Hellbound picks up right after the first film and we find Kirsty under psychiatric observation.

The police, of course, think she is…well, a bit crazy.  Doctor Channard is a famous psychiatrist (he runs the Channard Institute) and along with his protege Kyle, is overseeing Kirsty.

But Channard harbors a secret. The Institute’s basement is full of especially disturbed patients (it is reminiscent of the worst of the asylums that made the news in the 80’s). Kirsty has seen the skinless body of her father begging for her to help him, and she becomes obsessed with the notion. She convinces Kyle to investigate.  It turns out that Channard is obsessed with the Lament Configuration and has done a crazy amount of research. He has several of the boxes.  Kyle hides and witnesses Channard sacrificing a patient to bring Julia back from the first film.  This sets everything in motion.

One of the interesting things is that it is kind of clear that although the Cenobites were the most memorable aspect of the films, the filmmakers wanted Julia to be the central villain.  As Doug Bradley himself has noted, Pinhead and the Cenobites are more dispassionate observers. They are simply there to do their assigned duty.

The film delves deeper into the mythology of the Cenobites, or rather, it adds a mythology.  Bradley said he had been told by Barker that Pinhead had once been human, and the film establishes he was a soldier in the 1920’s. The film actually attempts to redeem the Cenobites, by having them fight the other threats of the film. It ends up not quite working, but again Bradley’s performance is terrific.

The film also has some really interesting visuals. Hell is a confusing and seemingly lonely place.  Pinhead warns Kirsty that everyone is in their own hell. She finds her uncle Frank and his hell is a constant teasing of his lust…beds slide out from the walls, women writhing under a sheet…but when Frank removes the sheet there is nothing their. He is facing an eternity of being unable to satiate his lust.

On the other hand, the film falls into the trap of a punning villain, which feels out of place next to the proper Pinhead.

Hellbound is kind of interesting, but also disappointing in how it deals with the Cenobites at the end of the film.