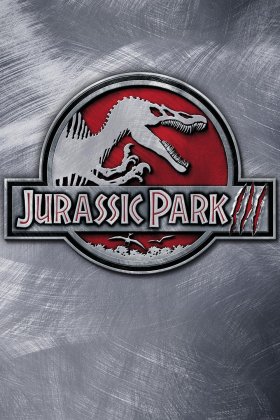 Alan Grant and his assistant Billy are hired by a rich couple to give them a tour of the island from the second film. Grant discovers that instead of just flying low over the island, his hosts plan to land on the island.

It turns out that the couple are actually there to find their son who disappeared on a trip with his mother and her boyfriend. When they are attacked by a new large dinosaur, they find themselves on the run and trying to figure out their way off the island.

This film does not really try anything new. It set the story on an island again. They take refuge in run down empty buildings. They narrowly escape dinosaurs. Somebody’s greed gets them in trouble.

Steven Spielberg did not return to direct the third Jurassic Park film, instead it was directed by Joe Johnston (the Rocketeer and Captain America). Johnston is a good director, but the film really lacks the Spielberg touch. In addition, the dinosaurs, while mostly looking find, can at times look a bit stiff. Again, the film makes heavy use of raptors. The new dinosaurs are pretty interesting visually.

The film has a good cast, but some of the rather cliched storylines simply feel tired. This is especially true of the divorced couple rekindling their love.  The adventure brings them closer together, suggesting they will recommit to each other. But this ignores the fact that Leoni’s character discovers her boyfriend was eaten by dinosaurs hours earlier.

While Jurassic Park III is passable entertainment, it is easily the weakest entry in the entire franchise (in my opinion, anyways).