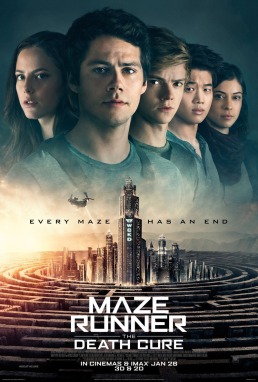 In an attempt to save Minho from WCKD, the film opens with a train heist.  We discover that WCKD has been searching for a Cure for the Flare, and this was the purpose of the Maze. In the minds of Ava Paige and her scientists, they are doing noble work, and if they must sacrifice some kids to save more people, it is worth that cost. The heist saves several kids, but not Minho.

When Thomas, Jorge, Brenda, Newt and Frypan decide to go on a secret mission to break Minho out of WCKD headquarters, they find that WCKD is actually at the center of a massive walled city. With help from an old ally they make their way into the city and WCKD headquarters.

The Death Cure got delayed due to a pretty bad accident involving star Dylan O’Brien during filming. But the end result is a pretty exciting film.  It is practically one long prison break type of film, with the heroes trying to save their friend and end WCKD.

Game of Throne’s Aidan Gillen (introduced in the Scorch Trials) makes a good heavy whose motives are not at all altruistic. Walton Goggins has brief but memorable role as a rebel leader dreaming of taking down the city. A couple characters get nice redemptive arcs and a few meet tragic ends.

The action is pretty non-stop and makes for an exciting close to the story (thanks to the producers for not splitting the last book into a two parter).

I enjoyed this series quite a bit, and I think it was well served by having the same director and screenwriters for all three films. Considering that other than the Maze Runner films, Director Wes Ball has only directed a few short films. He shows himself pretty prepared for big action.