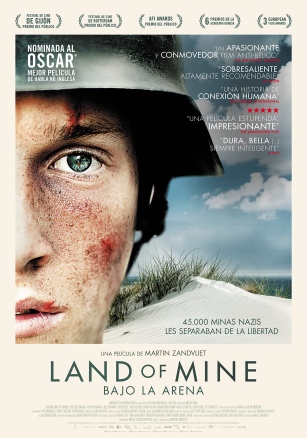 Set in Denmark after World War II, the Danish Government realizes their beaches are covered in deadly landmines.  Rather than risk their own people, they choose to use the German POWs that are so despised.

The film introduces us to Sergeant Carl Rasmussen as the Germans are being marched out of Denmark.  He is a man consumed with rage, and sees a German carrying a flag, and assaults him.  Rasmussen is assigned several German POWs to clear a local beach of landmines. The POWs are actually about fifteen to eighteen years of age.  They really are boys who seem to not understand what they were fighting for.

There is a scene early on in which several of the boys became sick.  When it is discovered they stole pig feed from the local farm out of desperation, it is realized they ingested rat dropping, causing the illness. The woman who owns the farm laughs, telling Rasmussen that she got some Germans after all.

And this is the movie’s big risk.  These boys were Nazis. But they are young boys, and it makes it harder to just be callous towards them.  And much of Land of Mine is about Rasmussen’s journey from anger to sympathy.  His concern that his superiors are being as cruel and as unkind as the Nazis were.

It is an intense film, where a cough can bring the unexpected end to a life.  You watch as these boys risk life and limb, and one careless moment can leave the viewer gasping.  This is a powerful film film, low on physical violence, but emotionally jarring.