Nothing But Star Wars Episode Two (Star Wars: Attack of the Clones, 2002) 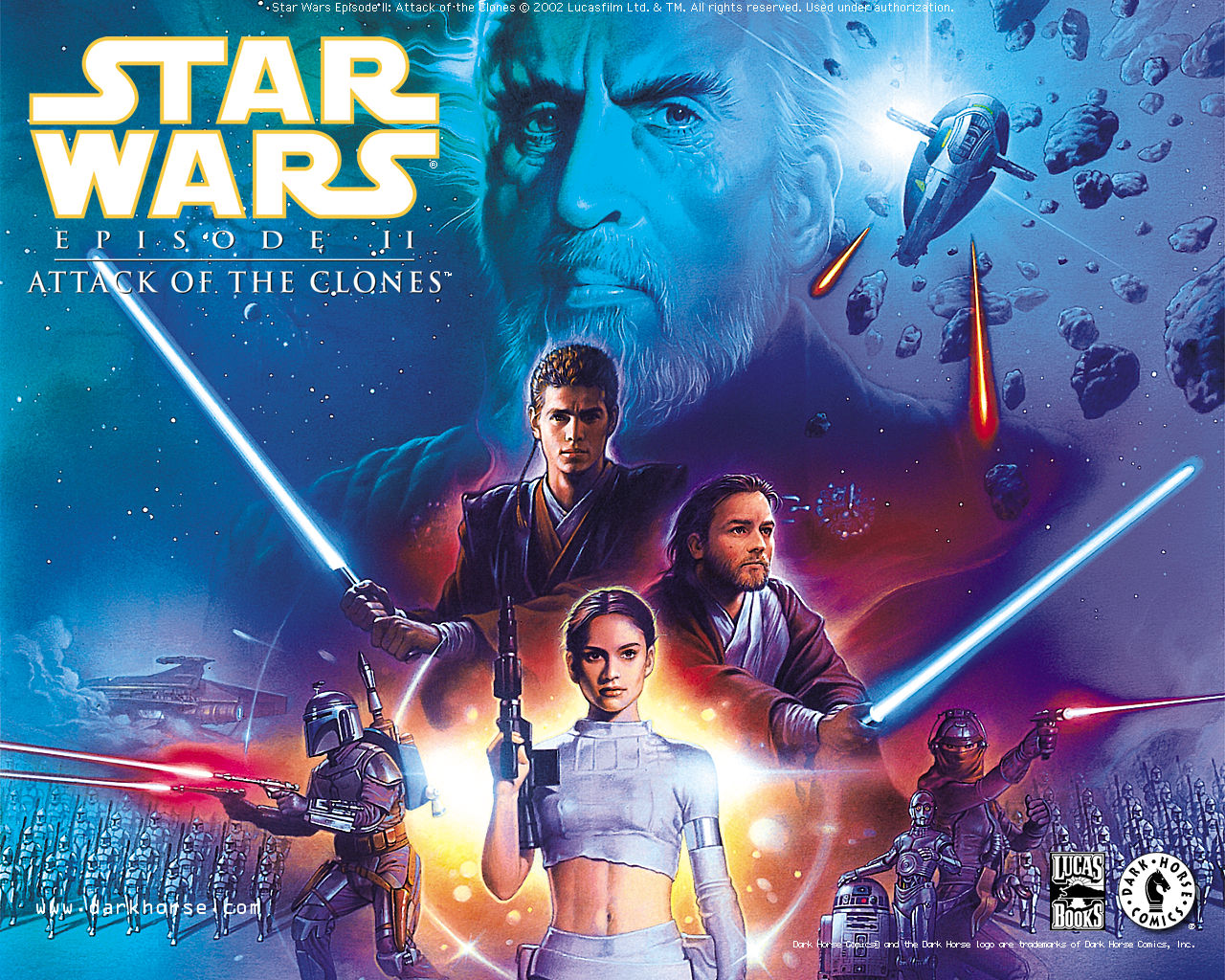 The Star Wars machine keeps plugging on.  Episode one had a rather mixed reception, but it made money.  It would have taken a catastrophic return to derail new trilogy.

The film would make a jump and start to try and “right the ship” so to speak.  As much as Lucas tried to defend Jar Jar Binks, his role gets diminished greatly in both this and the next film.

And let us go back on our spoilerific journey!!!! Send in the clooooooones!

Picking up around ten years after the Phantom Menace, Amidala is now a Senator.  This is, funny enough how they move Jar Jar out of the picture…he is a representative for Naboo. But anyways, after an attack on her ship as she arrives on Corsucant, the Jedi Council sends Obi Wan Kenobi and Anakin Skywalker to protect the Senator.

Anakin apparently still has his crush on Amidala, who is shocked to see Ani went from nine year old boy to a good looking teenager. They plan to stand guard in her apartment as they also try and determine how best to investigate the attempt on her life. 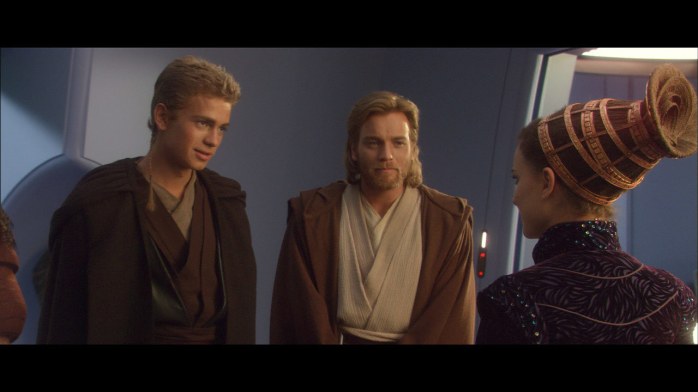 The investigation gets a boost though when a second attempt is made by letting to poisonous bugs into her bedroom.  Artoo derails the attempt by alerting the Jedi.  They pursue the shadowy killer through the skies of Corsucant (the skies are full with levels of traffic).

This leads to an exciting chase sequence with Anakin being incredibly reckless.

Really, it is a pretty enjoyable scene.  It ends with them crash landing in a seedy part of town.  They follow their target into a bar.  It turns out she is a shape shifting bounty hunter.  She starts to confess, only to be shot with a poison dart, dying almost instantly.

The Jedi Council formulate a new plan.  Anakin will accompany Amidala undercover to a remote part of Naboo, while Obi Wan will focus on the investigation. Obi Wan starts by focusing on the dart.  But he really cannot connect it to anything.  He visits a friend who runs a dive restaurant who tells him that the dart belongs to the Cloners of Kamino.

This starts a new mystery, as Kamino does not appear in any star maps he can find.  With Yoda’s help, he locates his destination.  When he arrives, he is surprised to find that they were expecting a visit.  Not from Obi Wan, but another Jedi Master who Kenobi reveals died several years before.

He discovers that the previous Jedi master had hired the Kimino people to create an army of Clones.  He is introduced to Jango Fett, a bounty hunter who is the basis of the clone army.  Jango had one requirement, and that was a clone untouched by the Cloner’s programming to raise as a son (can you see where this is going?). Lucas actually added actor Temuera Morrison’s voice as Stormtroopers and Boba Fett in the original trilogy.

There is a fight and Jango escapes with Boba, but Obi Wan follows them to the planet Geonosis.  There, Obi Wan discovers the Separatist army, led by Count Dooku.  Dooku is an ex-Jedi (and gets cool points because it is Christopher Lee).

Meanwhile, Anakin confesses feelings for Amidala.  At first she pushes back due to her career and the Jedi rules against love and marriage. Anakin argues they can love, and follows the Jedi tradition of loopholes.  But he becomes distracted by nightmares of his mother in trouble. He returns to Tatooine.  He discovers that his mother was sold to the Lars family.  However, rather than keep her as a slave she has married the farmer.  She was kidnapped by Sandmen.  Anakin locates the Sandmen village and discovers his dying mother.  In a fit of rage, he slaughters all of the folks in the village.

As they ready to depart, they get a message from Obi Wan.  Anakin and Amidala head off to Geonosis (taking C-3PO, who was with the Lars family,  with them). When they arrive, they are instructed to wait, but Anakin gets impulsive and they enter a factory making a droid army.  Elsewhere, the Galactic Senate gives approval to the Clone army.

Obi Wan has already been caught, but Anakin and Amidala are fighting their way through the factory, dodging the automated machines building droids. Instead of saving Obi Wan, they end up captured as well.

After getting caught, the three are brought into an arena to fight to their deaths against three very unique monsters.  In the midst of this battle Amidala gets a totally implausible rip to her uniform…like, comically implausible.  Just as it looks like the Separatists will when, the other Jedi arrive along with the Clone Army.

There is a big fight in the arena between the separatists and the Jedi and Count Dooku runs off.  Everybody takes chase after he and the retreating droid separatists. Anakin and Obi Wan reach Dooku’s lair.  Dooku manages to incapacitate Kenobi, but Anakin puts up more of a fight.  Dooku manages to sever Anakin’s hand and get the high ground so to speak.  Suddenly, before he can dispatch the two Jedi, Yoda walks in and they have the fight nobody knew they wanted. 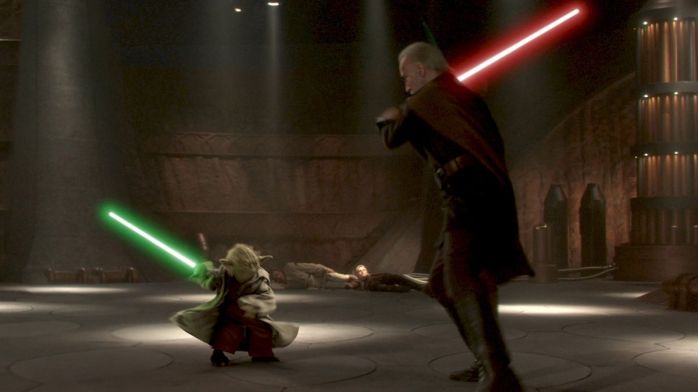 Once Dooku realizes he probably won’t win this fight, he retreats to his ship and escapes to fight another day.  The Clone Wars have begun.  Anakin gets his robot hand and secretly marries Amidala.

The film ends one this note, with a rather weak cliffhanger.  The Empire Strikes back ended on the note of the big reveal.  Here there is no big reveal really. “Luke, I am your father” drives discussion and anticipation for the nextr installment.  Here it is just…”Well, there is one more!”

So…about the whole romance.  Amidala was about fourteen when she met Anakin.  And generally I would not balk at a five year age difference. But as they are tied together by her time where he was just a cute kid…it seems like the intended romance might have been able to spring more organically had they started out more like a year or two apart (her sixteen and him fifteen or something). Christiensen and and Portman also lack any chemistry to sell the fast moving relationship. The relationship just feels so rushed it is hard to buy it ever happens.  And again, had they been much closer in age in the Phantom Menace, the seeds could have been laid much more organically.

This film is really the first to make a big show about the Jedi rules forbidding marriage and attachments.  Frankly, it is a dumb and terrible rule that calls into question the concept of the Jedi as an organization.  How is not having attachments going to make you a better protector? But then, we have seen that the Jedi are pretty sketchy.

To a certain extent, I don’t see this concept as bad.  The original films gave us only Obi Wan’s portrayal of the Jedi as noble Knights who fought oppression and stood for Justice in the galaxy.  That the prequel films are revealing a far more political organization is not a problem…but how it pulls it off is leaving a lot to be desired.  It is kind of dull, and in spite of their ineptness, it is pretty obvious we are supposed to be rooting for the Jedi.

The whole subplot with Boba Fett is really pointless.  It is, in fact, one of the most pointless fan service moments of the franchise.  Jango is killed, beheaded by Mace Windu in front of Boba.  We see young Boba holding his father’s helmet to his face.  And, this might have been a powerful image had Boba Fett been a major player who we saw a lot of in the original trilogy.  But he has, like, three lines including a scream before he dies Between Empire and Return of the Jedi.  This gives us no insight, and frankly, undermines part of what made him popular.  He was mysterious.  Things in Star Wars that needed no backstory? C-3PO and Boba Fett.

One thing that stands out is how lazy the world building is. In the original trilogy, things that paralleled our world still felt unique.  When Obi Wan is offered an illicit substance, he refers to it as “Death Sticks”.  I know there have been cigarette brands with ironic names like that…but really? Obi Wan’s friend with the diner? The diner looks just like a fifties diner.  And they have drinks like “Jawa Juice”. It just feels like there was no effort put into this world.

In spite of my complaints, this is a step up from the Phantom Menace.  We get some cool lightsaber duels, for one. Seeing Yoda in action turns out to be surprisingly fun.

Lastly, remember how I said Amidala gets an implausible rip in her outfit?  A cat monster things takes a swipe at here…this is the result: