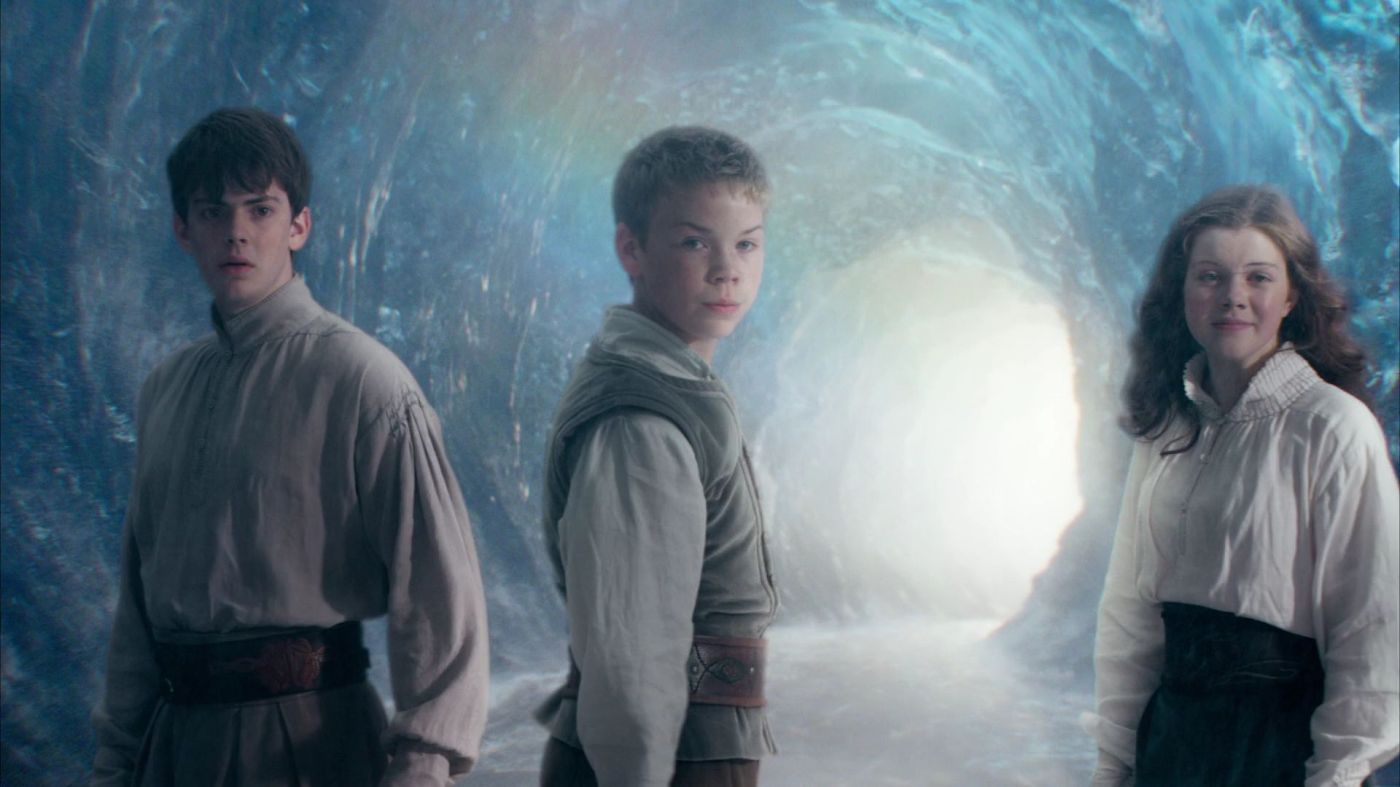 Picking back up World War 2, Peter and Susan are with their father in America.  Lucy and Edmund, on the other hand, are stuck with their unpleasant cousin Eustace.  He is a remarkably anti-social kid.  One afternoon he breaks in on a conversation between Lucy and Edmund.  Lucy notices that a painting on the wall of a ship at sea seems to be moving. As Eustace berates them, water starts to poor from the frame of the painting, filling the room.  Suddenly, the children are afloat in the ocean and picked up by a passing ship.

The ship is the Dawn Treader, captained by Prince Caspian. On the ship, Lucy and Edmund are thrilled to see Caspian, Reepicheep and other Narnians.  Eustice is more…stupefied. Especially by things like a giant talking mouse. Who has a sword. Caspian explains that they are on a mission to find the missing seven Lords that were driven into exile by Lord Protector Miraz.  Reepicheep has a separate mission to reach the end of the world and enter Aslan’s land.

The journey brings them to various islands with a variety of obstacles.  Eventually, they find the dark island in their hopes to vanquish a dark force that is attacking Narnians.

This last part is a bit more confusing.  There is the addition of a Green Mist that is not in the books.  It appears to steal Narnian citizens and taken them from beyond the reach of Caspian. The film departs a lot from the book, changing character motivations and emphasizing others.

Disney was not involved in this film, instead, Walden Media teamed with 20th Century Fox for this installment.  The Narnia films have struggled, in part, from inconsistent releasing.  The first film came out in 2005, the second in 2008 and then this film in 2010. Compare this to the Lord of the Rings and Hobbit films, which were consistently a year apart.  Or the Harry Potter films, which had a fairly consistent schedule of every two years.  We are seeing Star Wars films already on a regular yearly schedule. Three films in five years easily disrupts momentum that trying to pull off an adaption like this needs.  Especially when Narnia does not have a variety of other outlets to be kept in the front of people’s minds.

And if the films had been ridiculously high quality, one might forgive the inconsistencies.  But there is the problem.

The Voyage of the Dawn Treader is easily the best of the three films. Will Pouter is exceptional as Eustace and takes him from being an insufferable brat to a good kid convincingly. Simon Pegg’s Reepicheep (taking over for Eddie Izzard from the previous film) gives a likable performance.

The film’s visual effects are strong, and the Eustace Dragon looks great.  And yet, the film never really manages to feel…urgent.  Edmund envies Peter, Lucy envies Susan…the temptation of the White Witch (again!). It all feels like we have been there before, even though the setting is new.