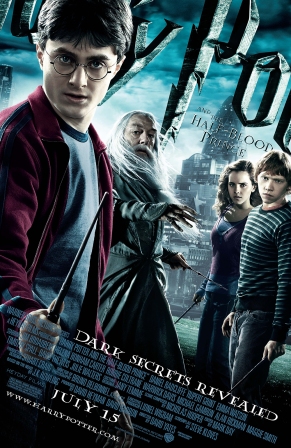 Now that the magical world knows Harry and Dumbledore were, in fact, correct and the Voldemort is back, the Death Eaters are becoming bolder than ever, going as far as to attack the non-magical world.  Harry is hesitant about returning to Hogwarts, but Dumbledore convinces him and uses Harry to entice another professor back to Hogwarts.

Horace Slughorn is the new potions teacher, but this is not the true reason he is wanted back at Hogwarts.  You see, Horace is a bit obsessed with celebrity.  He is drawn to star pupils. One of those pupils was Tom Riddle, who came to Slughorn for information on very dark magic. But his memory is muddled, and Dumbledore hopes Harry can get the information from him.

In the meantime, Harry has found a potions book for his class that is marked as the property of the Half-Blood Prince. It features shortcuts to success and unique hand-written spells.  Harry, Hermione, and Ron try and figure out why Draco Malfoy seems to be behaving very mysteriously. Harry suspects that Malfoy is behind several incidents with cursed items.

The film also builds on the seeds of a budding relationship between Ron and Hermione and introduces an “unexpected” love interest in Jenny Weasley.  The films actually started seeding this awhile back, with Jenny clearly having a school girl crush on him, very visible anytime she was around. Thankfully, the film avoids the book’s annoying “Spider-Man Ending.”  In the book, Harry gets all, “I cannot have love, for that puts people in danger”.  The film tosses this aside.which is a wise move.

The visual look of the film is matching the darker tone of the book.  David Yates uses a darker and at times duller pallet, but to the benefit of the film’s atmosphere. The film ends on a grim note, but effective in it’s set up for the final arc of Harry Potter.

The cast is, as always, quite strong. This film features the best chemistry between Radcliff and Gambon.  As Horace Slughorn, Jim Broadbent is both likable and sad, in you realize his desire to be admired is overpowering to the point that it has brought great sadness to his life.  And Tom Felton is a real standout, with this film elevating Draco Malfoy from entitled snob to a very conflicted kid.  He really sells the notion that Draco is not as enamored with the life of a Death Eater as he portrays.

This is, in my opinion, one of the strongest of all the Harry Potter films.