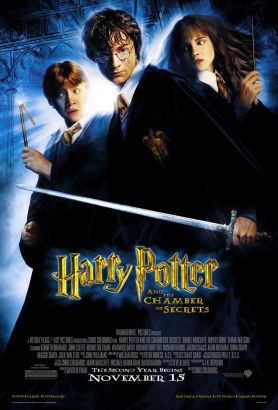 The first film was a huge success, and so a follow-up was certain.  When the film opens, his guardians, the Dursleys, have given Harry an actual bedroom.  But they also put bars on the window. A strange creature calling himself Dobby (and reveals himself to be a house elf) tries to convince Harry to not go to his second year at Hogwarts. But when the Weasley boys show up with a flying car, they break Harry out and get on their way.  But after Ron and Harry are blocked from the magical platform to get to the train for Hogwarts, they take the flying car.

Once at Hogwarts, the Harry, Ron and Hermione discover a mystery in the past of Hogwarts.  The school is full of passages and hidden rooms.  They discover cryptic references to the Chamber of Secrets and a past for Hagrid.

Like the first film, this one tries to cram in as much from the book as possible.  It also unravels more about the past of Lord Voldemort. The film introduces Gilderoy Lockhart (played with flamboyant revelry by Kenneth Branagh).  Lockhart gives insight into the world of the celebrity wizard.  He is beloved for his books detailing his exploits fighting evil wizards, fantastic beasts and all around heroism.  And yet, there is something about him…he seems…rather inept.

Certain characters offer a window into some of the darker aspects of the Wizarding community.  Specifically the concept of the House Elf.  What we find in the film is that the world of wizards has pretty much enslaved elves.  The elves are abused and cower before their masters.  There may be wizards who treat their house elves well.  But this is never really shown in the films or the books. In the books, Hogwarts uses house elves, though the movies shy away from this.

The visuals are improved in this film, and Columbus is clearly enamored with the world of Harry Potter, as he tries to fill the screen with as many visual queues from the books as possible.

Again, it is the adult cast that shines.  Chamber of secrets will certainly charm many fans of the franchise and will likely entertain general audiences as well.  It’s die-hard faithfulness to the source can still get in the way of this film, but overall, it makes for an enjoyable watch.