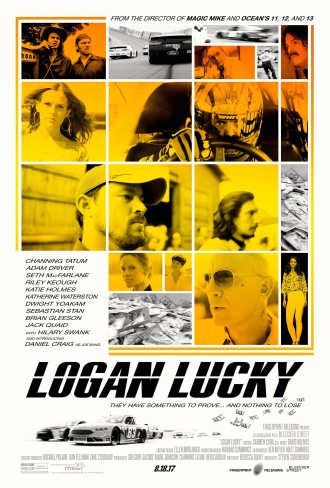 Steven Soderbergh retired from directing in 2013.  He directed multiple episodes of the Knick after that.  He has three more films in the pipeline after this years Logan Lucky.  The guy sucks at retirement.

But that is okay for me.  Logan Lucky is about Jimmy Logan…should have been football star who hurt his knee and went on to live the blue-collar life in West Virginia.  His brother, a one armed bar tender and vet Clyde, believes the Logan family is cursed.  Tragedy follows the family everywhere.  When he loses his job, Jimmy is desperate to find money to improve his situation.  His ex wife plans to move with her husband and take their daughter with them.  And this leads us to the heist at a race track on race day.

Like a blue-collar Ocean’s 11, Jimmy (along with Clyde and their sister Mellie) recruits Jimmy Bang (who in turn has them recruit his brothers) an explosives expert.  The plan is elaborate, and you almost wonder if the kind but somewhat simple Jimmy can manage it.  And here is the weird rub of heist films, for me.

I do not endorse robbing people.  I do not believe it is okay to come up with big heists.  But I sure do love a heist movie…watching the plan come together, watching the plan get executed…and the inevitable reveals of the stuff I missed.

And Logan Lucky does not disappoint there.  It is charming and funny.  Part of this is in the cast.  Channing Tatum has been one of those guys who I under-estimated.  As Jimmy Logan, he is soft spoken and gentle, but not afraid of a fight.  And Adam Driver’s Clyde is somewhat heart breaking yet endearing.  Riley Keough is the fast driving Mellie…and then there is Joe Bang…played to great comic effect by Daniel Craig.  Oh yeah… Farrah McKenzie as Sadie Logan?  Adorable little kid.

For the most part, the film loves these characters…the only characters that feel a little to over the top and cartoonish?  Fish and Sam Bang…but even they have their moments.  Logan Lucky was a lot of fun and even had a few moments  that made me tear up.  It plays out very in a very satisfying fashion.

The New York Post claims this film does not “get Trumpland”…but frankly?  Why should a person who just enjoys a fun movie care about that?