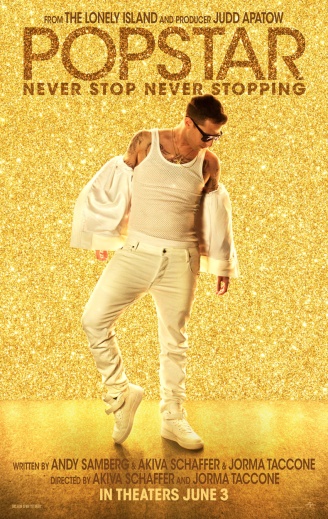 I confess, for several years I was pretty lukewarm on Andy Samberg.  I recall not finding Hot Rod all that funny.  Over the years, I have been convinced I was wrong about Samberg.  Especially with his hilarious performance as Detective Jake Peralta on Brooklyn 9-9 (easily one of my favorite comedies from the past few years).  In fact, I am thinking of revisiting Hot Rod to see if my feelings on that film have changed.

I was unsure about Popstar, because while the trailers did look funny, I worried it would be unable to sustain the gag.  Popstar is about popular pop artist Conner.  Conner is from a popular boy band Style Boyz.  He went solo and was propelled to even greater success, while his bandmates had…less success.

His second album is a critical and sales failure.  He attempts to sustain his career as incident after incident makes it clear his is crashing and burning severely.  While Popstar: Never Stop Never Stopping is not a wholly original idea, it is well crafted.  Samberg and writer/directors Akiva Schaffer and Jorma Taccone have packed the film so tightly with jokes, it overcomes the fairly pedestrian plot.

Samberg’s very clueless and shallow Conner somehow manages to still be likable.  And this is where the movie shines.  Its satire of the world of entertainment is simple but effective.  The film could have overstayed it’s welcome, but they clearly knew when to cut a gag or scene that was unnecessary.  Just under an hour and a half, Popstar: Never Stop Never Stopping has a high rate of jokes that hit their mark.  I was laughing throughout the film.

Samberg is supported by a strong cast of comedy veterans, such as Tim Meadows (who seems to have comfortably slid into the straight man role) as Conner’s hard working manager.  Chris Redd is very funny as Hunter, a rapper on the rise that is opening for Conner’s shows(he tells Conner, “I wanna be you, kind of, but not white. Like black still, ’cause it’s strong. It’s a strong color.”) and then starts to overshadow Conner.

Popstar was an unexpected comedy pleasure for me, delivers a load of laughter.