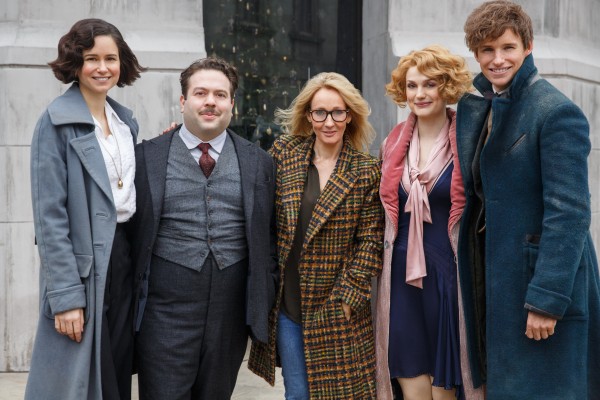 It was not long after the Harry Potter series came to a close, we got the fairly expected announcement of a new movie that would be set in the magical universe of Harry Potter.  This was certainly enough to get fans excited.  It was then announced it would be a story set before Harry or Voldemort were walking the earth.

Earlier this year they said it would be a trilogy.  A few weeks back?  It became a …uh…Fivology.  And so, this new beginning for the wizarding world is meant to kick it all off.  Set in 1926, we find that the world of Wizards is not idyllic.  There are issues with the possibility of exposure.  The Dark Wizard Grindelwald has gone missing.  Disgraced wizard Newt Scamander has come to New York and finds a problem when his suitcase full of magical beasts gets switched with aspiring baker Kowalski’s suitcase of pastries.  This forces their lives to be intertwined, but things get even more complicated when former Auror Tina tries to take Newt in.

Instead of a coming of age tale focused on friendship, sacrifice and so on, Fantastic Beasts is more focus on political thriller territory.  This is not inherently bad, but it is all pretty light in how it is handled.  There are good ideas at play, but one big twist is absolutely no surprise at all.  While the film explores surface issues such as the rules of the Wizard world and the conflicts between the various Wizarding communities.  At this time, no muggles  (or No-Maj as they are called in America) were allowed to be aware of the Wizard world.  Wizards are not allowed to have friendships with muggles, even.

The film is a bit stuffed with characters who feel like they are important.  There is  the creepy anti-magic “family” led by Mary Lou.  Her use of children to disseminate her ideas is never deeply explored.   Then there is publisher  Henry Shaw and his sons Henry Jr and Langdon Shaw.  Langdon is intrigued by the claims of Mary Lou, but his father is more concerned with his brother’s political campaign.  And yet, these characters do little to the point of barely feeling necessary.

On the other hand?  I really liked Newt and Tina.  Both are simply trying to do the right thing, and both are thoughtfully compassionate and, a little clumsy.  I found Kowalski an enjoyable presence.  He is at first stunned, but then takes great joy in his discovery of the world of wizards.  Rather than be frightened of Tina’s psychic sister Queenie, he finds it exciting.  The four make a fun team.

It is fun to revisit the Wizard World of J.K. Rowling, really, it is.  I enjoyed the character moments (especially between our four heroes).  Remember how I said there were going to be five films?  Well, as the film built up, I was finding myself looking forward to the story of these four going forward.  Except, really?  The film ends in a way that makes it clear this was originally going to just be one film.  Everything gets neatly tied up and everything is fixed, making much of the film feel rather meaningless on its impact on the world of wizards.

This will be fun for those who simply miss getting to revisit the Harry Potter Universe.  I had a nice time watching it, it is just that it ends somewhat…anti-climatically.  It is passable entertainment, but it is not quite a triumphant return.