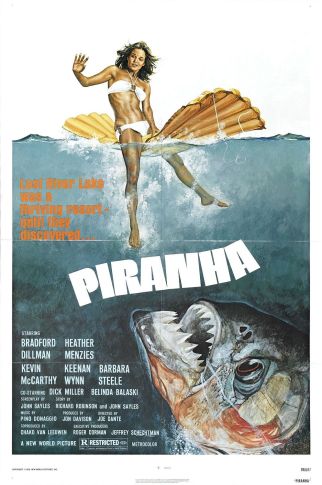 Joe Dante’s third film was one of Roger Corman’s knockoff films.  Corman had a formula and it had a lot to do with seeing what was big or on the verge of big and following suit with lower budgets.  And it worked.  A lot of well known filmmakers and performers came out of the Corman Machine.  Dante, James Cameron, Ron Howard, Martin Scorsese, Gale Anne Hurd and John Sayles are but a few.

The first writing gig for John Sayles, Piranha is the tale of a young private detective named Maggie who is searching for a rich man’s daughter who disappeared on a hiking trip.  She meets up with local guide Paul and they find a remote building with a large pool.  They suspect maybe there could be bodies in the pool.  They find the lever to flush the pool, but get in a struggle with a crazed gentleman who wants to make sure they do not succeed.  After they managed to flush the pool, they find two skeletons.  Ultimately, it turns out that the pool was full of genetically altered piranha who are making their way down the river eating everything that comes into their path.  The river is taking them right to a local summer camp and a grand opening of a resort.

As is to be expected, there is a race against time (Paul’s daughter is at the camp) as Maggie and Paul try to warn everyone.  The local mayor wants them jailed, as he does not want to hurt tourism.  Did I mention that Piranha was made to cash in on the success of Jaws?

Sayles and Dante do not treat this as just a knockoff of a bigger film.  They understand the limits of their budget, and center things to work within those boundaries.  This results in a fun monster movie that has plenty to enjoy.  It is not nearly as exploitative as other Corman films (Corman often had deals with distributors requiring sex scenes and gratuitous nudity) and the gore is low level.  The titular piranhas are often unseen or blurry shadows.  The attacks often involve people disappearing beneath churning waters.

The cast is enjoyable, especially Corman regulars like Paul Bartel and Dick Miller.  Kevin McCarthy is always dependable for the “Maniacal Scientist” role, and he does not let the viewer down here.  Piranha has earned it’s cult status, being one of the more clever attempts to take advantage of a hit movie.  It manages to avoid simply being an imitation and is quite memorable in it’s own right.