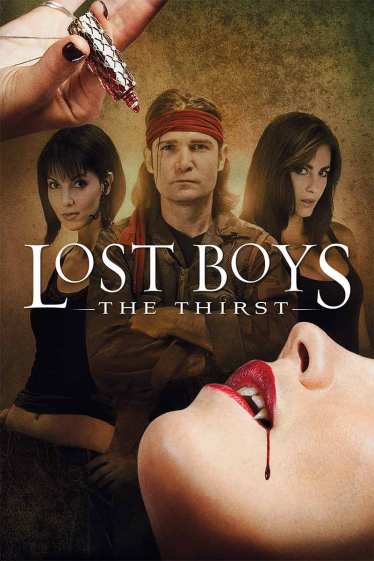 In spite of the critical failure of the Tribe*, somebody wanted to try and keep the franchise undead.  And I can say…this is a better film than the Tribe. This came out a few months after the death of Corey Haim.  The Tribe had a credit scene showing Sam as having become a vampire and in an alternate ending, there is a brief shot of Vampire Alan on his way.  This film leaves Sam out entirely, instead bringing back Jamison Newlander as Alan Frog.  The film makes Edgar Frog (Feldman) the center of the film, though the Frog Brothers are reunited, out to finish off a new crew of vampires.

The Thirst pretty much ignores the Tribe, other than Edgar is living in a shack and his brother is a half vampire.

This time around, we see how Alan was made into a half vampire, leading to a split between the Frog Brothers.  Edgar is down on his luck, facing eviction from his camper and trying to raise money by selling his comic book collection.  He takes a job from Gwen, a Stephanie Meyer type, to help her find her brother, who she believes has been captured by vampires.  Edgar despises her work for romanticizing vampires, but is convinced that the vampires in question  include the first vampire.  Edgar tries to recruit Alan to help, but Alan refuses, feeling chances are that killing the head vampire will not do anything.

Edgar is forced to work with reality star Lars who was hired as a fallback for Gwen.  They go to the location of the Vampire rave (shades of Blade there) where they take on the vampires.  I mean, that is kind of expected, right?  There are a couple twists before they reach the end, of course.

As I said…this is better than the previous sequel.  This is not saying much, as it is no where near as enjoyable as the original.  They try and be somewhat original in this story.  Of course, having vampire movies that mock the Twilight franchise is hardly new.  Same with reality show characters.   The film’s call back moments to the original film kind of work.  During an early conversation Alan asks why Edgar did not go to Sam and Edgar states the Sam Turned and he had to stake him.  Alan asks about Michael & Star (who are apparently still a couple) and Laddie (the kid vampire in the original).  But it also has jokes like: “It turns Holy Water into Holy Slaughter.”

It has it’s moments, and sets up the planned fourth sequel which was going to have the Frog Brothers take on werewolves.  It even hints that one of the characters is a werewolf. There was even talk of a Frog Brother TV show.  However, Warner Brothers shut down the  Warner Premiere label.  This killed the the film and TV show for the foreseeable future.

Part of the problem here is that Edgar is a pretty skilled vampire hunter at this point.  He and Alan are competent.  Part of the charm of the Frog Brothers in the first film was that, for all their talk, they were largely bumbling and ineffective…when they did succeed?  It was usually by stupidity or some other intervention.  And having them be the skilled folks who are the only ones who know the real danger is just…well, not as much fun.

The film is flashier than the original, but has less of an identity.  The fast shots make it look like lots of vampire movies we have seen.  The Lost Boys had a style all it’s own.  The Thirst does not.

*The film received a 0% on Rotten Tomatoes critic assessment is still at zero to this day.  The audience score is 25%…in spite of this, it was one of the top selling videos that year.