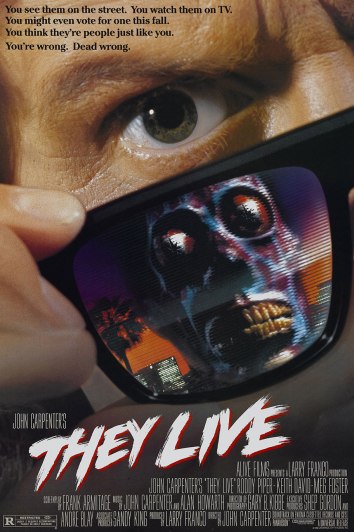 I have only one thing to say.  Fifteen minute fight between Rowdy Roddy Piper and Keith David.   ‘Nuff said.

Beloved Wrestler Roddy Piper is Nada, a wandering Construction worker looking for work.  When he discovers a group of resistance fighters hiding among the city’s homeless, he finds himself stuck in a battle against humanity and aliens bent on human enslavement.

When Nada discovers a pair of sunglasses that allow him to see the aliens, he tries to figure out what to do.  He enlists help from fellow construction worker Frank and TV Executive Holly.  What follows is an insane ride.

The film is packed with action and humor.  One of the most memorable moments is Roddy walking into a bank wearing the magic sunglasses and holding a shotgun declares, “I have come here to chew bubblegum and kick ass.  And I am all out of bubblegum.”

The other big moment is a nearly fifteen minute fist fight between Roddy Piper and Keith David.  It is amazing.  Asked recently if he ever considered shortening the fight, Carpenter indignantly declared “F**k no!”

This is a good cast who make a rather ham-fisted film work.   Keith David is always good and Meg Foster is mysterious and uncertain in her motives.  And those eyes. 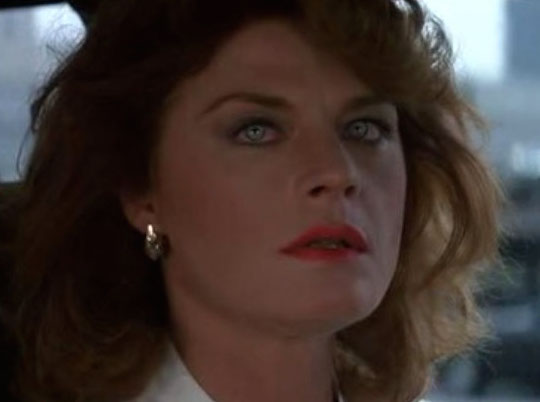 I mentioned ham-fisted…the plot is a huge screed against the 80’s consumerism and Reaganomics.  When Piper puts on the glasses, he sees in black and white…

But he does not just see the aliens.

He also sees how they are taking over….advertising.

It is hard to ignore, and while it may be a valid criticism, it is done in a way that feels almost comedic.  The aliens reward people willing to cash in.  A guy goes from being a bum to a member of the 1%.  In a way I am surprised nobody has remade this one yet since 2008.

In spite of this, the film is effectively fun and has some real twists.  It is a well loved Carpenter film for a reason, and it is not for the politics.  It is a goofy action film, a cross between the grim and serious Escape From New York and the boisterous Big Trouble in Little China.