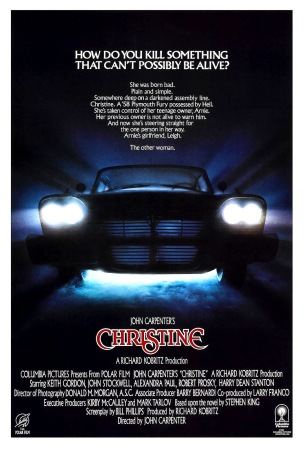 After the Thing, Carpenter went with a different type of terror.  In some ways, it is a return to the ghostly tale of the Fog.  But instead of Leper Pirates, Christine is the tale of an obsessive car.

Nerdy Arnie is put upon…he has one friend (athlete Dennis) and overbearing parents.  He discovers a decaying old car, a 57 Plymouth Fury.  It’s first owner named it Christine and Arnie falls in love.  He buys the car, and it begins to love him back.  Christine brings about a change in Arnie.  He dresses a bit cooler, he behaves with a bit more attitude.  He even gets a girlfriend.  Attractive Leigh, who is new to the school.  Christine begins to take out the bullies who make Arnie miserable, but the obsession between Arnie and Christine grows and becomes dangerous to his only friends.

Christine is a very good adaption of Stephen King’s work.  It focuses on what is important, even when it makes changes.  Christine’s first owner (Roland LeBay) is the ghost that haunts her.  Arnie purchases the car from him and then he dies.  It is revealed he was a dark man and he has a dark history.

Carpenter optioned to, instead, make Christine a spirit of her own.  And it works quite effectively.  Keith Gordon (Jaws 2, Dressed to Kill) captures Arnie’s descent into truly obsessive behavior effectively.  He take Arnie from Sympathetic to frightening so well.

Visually, the movie is impressive.  There are some amazing shots of Christine (one where she is driving down the road engulfed in flames).  The effects are  “simple” but very effective.  When Christine is damaged, she “fixes” herself and it looks great.

It is interesting to note that the initial negative response to Carpenter’s The Thing left John feeling like he had to take the job.  He did not find the book particularly scary.  And yet, in the end, he created an effect story of obsession certainly belonging in a list of great John Carpenter films.