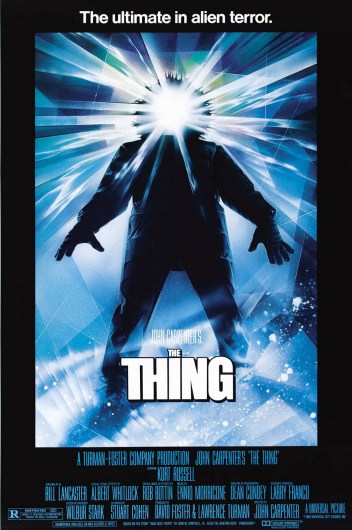 Hot on the heels of Escape From New York, Carpenter and Russell worked together on the Thing.  A film based on the short story “Who Goes There” (which had been adapted previously as The Thing From Another World).

Focusing on a research team in a remote arctic location, this story of paranoia is highly effective.  The team is attacked by a pair of Norwegians.  When they go visit the base, they find the remains of some major mayhem.  They also find some bizarre corpses and video evidence of something discovered within the ice.

What they do not realize, until it is to late is that the Norwegians were not attacking them…they were after something else…something protected by our American team.

And what they discover is an alien lifeform that can mimic any life form it encounters.  And that is when it really gets interesting.  Who can you trust?  Who is human and who is not?  Carpenter uses this to fuel a paranoid and exciting story full of twists and turns.  Kurt Russell’s helicopter pilot becomes a defacto leader, much to the annoyance of Garry (Donald Moffat) and Childs (Keith David).

The cast is excellent.  It is hard to go wrong with guys like Keith David and Kurt Russell, but the entire cast are top notch in their performances.  The film is full of tense moments that lead up to shocking moments.  The shocks are courtesy of FX guru rob Bottin and his crew.  The transformations are bizarre and gruesome in the best way possible.  This film is a benchmark of effects achievement, and it is a great selling point for practical effects.

John Carpenter’s The Thing is an absolute sci-fi and horror classic and one of Carpenter’s best films.

This month, Shout!Factory has released an all new Blu-Ray of the film.  The Two disc Special Edition has a very nice 2K scan, resulting in an excellent picture.  The packaging has lush new cover art.  It also has the Drew Struzan original on the reverse side.

The special features are are numerous and about as comprehensive as a package is eve be.  There is a brand new interview with Carpenter by director Mick Garris.  Another new feature is the Men of Outpost 31 which features interviews with several cast members (though, no Kurt Russell).  Both of these offer new and entertaining insights to the film.  They also included the Terror Takes Shape, a 90 minute making of film from the original DVD.  It was left off the previous Blu-Ray.

The set also includes vintage featurettes, audio commentaries (a new one with Director of Photography Dean Cundey), outtakes and one of the more surprising inclusions the Network broadcast version of the film.

This is a set worth having in one’s collection.  It is filled to the brim with features to explore the history and design of the film.  Shout!Factory has done a stellar job here.