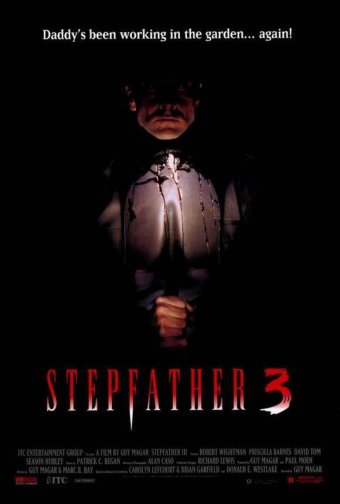 While planning to make a third film, the filmmakers ran into a little snag.  Terry O’Quinn turned them down.  To be fair, he had a pretty television and film schedule going in 1992, so it may have been a scheduling issue.  They ended up casting Robert Wightman (John Boy on the Waltons).  To explain why he looks so different (and still living after the second film) he visits an underground plastic surgeon and gets his face changed.

He joins a church and starts working at a local landscaping/nursery business.  He meets and captures the heart of Christine (Three’s Company’s Priscilla Barnes) and her wheelchair bound son Andy.  Andy is into computers and especially enjoys a murder mystery game.  Andy just never trusts Keith, even after he marries Christine.  As people start getting in the way, the killing begins.  He also starts to plant the seeds of a new relationship with Jennifer and her son Nicky.  But when the two worlds collide, he finds himself trying to salvage one of the relationships, everything goes sideways.

This film is far more focused on killings and most easily is more of a slasher film than the previous entries.  Characters are constantly giving the Stepfather reason to kill them.  The film is also shot in a way that makes this film seem like a cheap imitation of the previous entries.  Wight does do a decent impression of Quinn’s inflections as the Stepfather, but the film never captures the menace and quite often feels like it is on the verge of parody. Early in the film, it is suggested that while Andy is in a wheelchair, the condition is psychosomatic and he could walk if he could get emotionally past it.  This leads to a moment with “inspirational” music playing as he forces himself to stand and fight to save his mom.

This is the bloodiest of the series, and it suffers for that.  It also appears that this film was meant to put the series to rest, as the Stepfather cannot really come back from the end of this film…unless you makes him an evil spirit.  It is easily the least enjoyable film in the franchise, and not recommended.  It has a pretty good poster though.