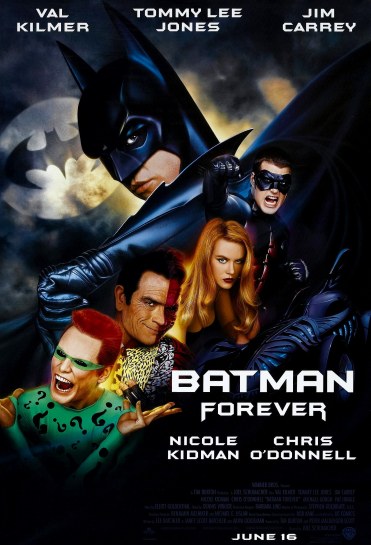 Batman Forever had some big shakeups.  Tim Burton and Michael Keaton were out.  Joel Schumacher and Val Kilmer were in.  But the real shakeup was…Warner Brothers wanted to sell more toys.  Schumacher had read Batman: Year One.  He really wanted to tell that story.  The studio was not interested.  Schumacher thought that if he gave them the movie they wanted, he might be able to persuade them on the next film to do the film he really wanted to do.

For the Riddler, the film hired Jim Carrey (fresh off Ace Ventura:Pet Detective, the Mask and Dumb & Dumber) and for Two Face?  Tommy Lee Jones (their established actor choice-no doubt selected for his uncanny resemblance to Billy Dee Williams) was their choice.

The casting of Kilmer was treated like this was a James Bond casting choice. We can replace anybody.  Anyways, The story also introduced Robin (played by Chris O’Donnell).  Batman’s love interest is sexy psychiatrist Chase Meridian.  Really.  Adding more characters means more action figures…and vehicles…Super-heroes gotta have a lot of rides…as do their arch enemies.  Well, unless you are Chase Meridian…you do not get to be an action figure.

Much of the film is given to Jim Carrey to do his typical over the top goofiness that he was known for.  This was three years before he started playing roles that required him to tone it down.  It can become obnoxious, and Tommy Lee Jones tries to keep up, going over the top himself.  Kilmer just fills his tuxedo and walks through the film.  Multiple villains make for a bloated plot.  Add to that the introduction of Robin?  This is not O’Donnell’s finest moment.  He is just not convincing as a skilled martial artist or acrobat.  Chase Meridian is a very boring character.  She seems to be a character existing solely because they felt there should be a love interest.  You know…for the girls.

Again, there is little meat for characters like Commissioner Gordon…and the films make him feel like an old man who is ever so ineffective…and knows it, so he waits on Batman to save the day.

Visually, Schumacher goes more Art Deco with his Gotham City.  He plays with vibrant colors and visual queues.  This is certainly an interesting change…except it also becomes highly implausible that such a city would be built this way.

This was the Bat Franchise teetering on collapse.  But there were no lessons learned.