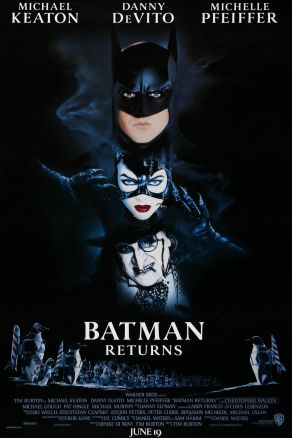 Jack Nicholson kind of established the villains would always be played by big names.  Danny DiVito was brought in to play the Penguin.  But this was not the traditional Penguin from the comics.  Not merely a short round guy is a top hat, Burton envisioned an origin in which Oswald Cobblepot is born to an affluent family who are repulsed by his grotesque appearance. His father (played by Paul Reubens, who would play Penguin’s father on Gotham decades later) and mother (Diane Salinger) dump him over a bridge where he is found by penguins.

Batman Returns is a rather odd duck.  Selina Kyle is a meek secretary who discovers the evil plans of her boss Max Shreck (Christopher Walken).  She is thrown out a window and barely survives…but wakes after being found by cats.  She flips out and apparently has the nine lives of cats and a really sexy persona.

While the film still  has the gothic visuals, it really feels all over the place.  Adding the secondary “villain” of Catwoman means there is that much more story to address.  On top of that you have a villain in the name of Max Shreck.  Add to that a few moments of implications of Penguin being a bit of a sexual creep (for instance, he is running for mayor and he puts a button on a young woman, groping her breast as he does it).

The film has a more interesting plan than the first film, but still, the sheer goofiness makes it almost to campy.  You have penguins fitted with rocket launchers, weird carnival henchmen, evil businessmen, latex covered secretaries…It never really comes together, and falters repeatedly.