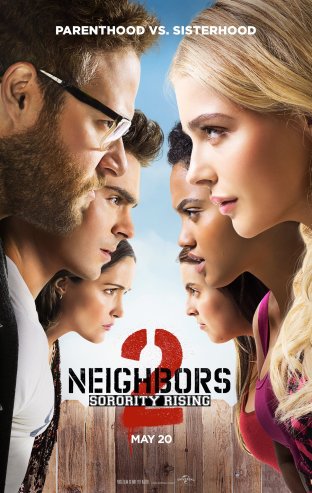 I have to be upfront here. I did not enjoy Neighbors.  I thought it was just a random set of sketch ideas, most of which were not super funny.  I don’t have strong opinions on Efron and really, sometimes I like Rogen, sometimes I tire of his gimmick early.

So, honestly, I thought I would sit Neighbors 2 out.  But I ended up checking it out when someone suggested that the film might have something more going on than the previous outing.  And Neighbors 2 does.  It actually has a story, and characters I liked.  We are quickly re-introduced to Mac (Seth Rogen) and Kelly (Rose Byrne) who find out their life is about to get a big change.  Then we see what the frat boys Teddy (Zac Efron) and Pete (Dave Franco).  They two are facing a life changing event… Pete’s boyfriend proposes, and then they suggest Teddy move out.

At the same time we meet Shelby (Chloë Grace Moretz), Beth (Kiersey Clemons) and Nora (Beanie Feldstein).  The three girls were pledging the Phi Lamda Sorority.  They are disappointed to discover that sororities cannot have their own parties.  And when the girls go to a frat party, they find it all very creepy and off-putting.  So they set out to start their own off campus sorority.  They end up renting the house next to Mac and Kelly, with help from Teddy.  Mac and Kelly were planning to sell their home, but it is in escrow for thirty days.  And then the mayhem begins, as they worry the new buyers will back out when they see a busy sorority next door.

As the situation escalates, both sides take more and more risks, with mostly funny results.  This part seems pretty much like a repeat of the last film.  Except, the difference here is that you can actually sympathize with everyone in the film.    You know exactly what worries Mac and Kelly…you also can see what is compelling the sorority girls.  They want to create a sorority that is able t have it’s own parties, sans date rape drugs, attempts to bed them or get them generally naked.  The film indicts the frat culture as one less than friendly to women, and these young women are making a stand.

Truthfully, this is Efron’s movie, as he steals the scene almost every time.  As much as the film codes Teddy as being real dumb, he shows himself to be smart and helpful when he feels appreciated and wanted.  He wants to connect with people, whether it is his best friend Pete, Mac and Kelly or the Sorority.  And he also learns.  When he is talking with Shelby , Beth and Nora early in the film, he asks why they do not pledge an existing sorority.  They explain how they cannot throw their own parties, but instead must go to frat parties.  Teddy does not see the problem.  The girls offer up the rapey nature of the parties.  They cite how every theme incorporated women as “Ho’s”.  Teddy defends frat parties at first…but as he starts naming their themes he pauses…and then is horrified at just how disrespectful their parties were.  Teddy listens to people.  He takes them seriously and he learns from people.

The story ultimately celebrates relationships.  When the Sorority tries to sabotage Mac and Kelly’s marriage by sending them each messages that the other is freaking out about the marriage.  But both Kelly and Mac have, as their first instinct, to seek each other to talk it out.

The jokes in the film are effective, I laughed out loud often throughout the film.  But the jokes serve the story far better than they did in the first film.  This is the rare comedy I can think of where I enjoyed the sequel more than the original.  A lot of that is the way the story unfolds.  The film has a lot of raunchy and gross out humor, so if you really dislike that type of humor, this may not be the film for you.  But I found it all very effective and I was engaged by the film.