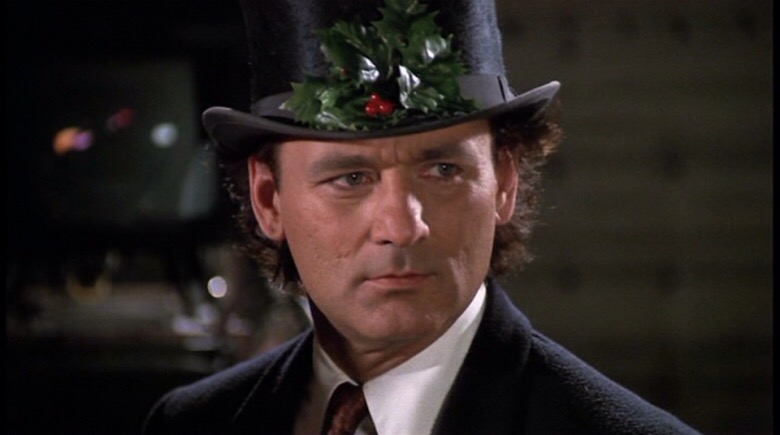 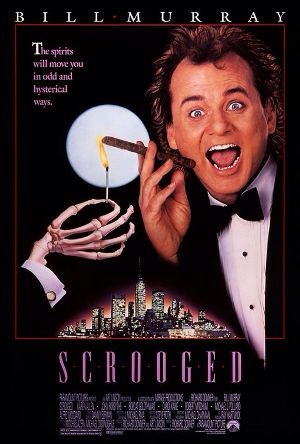 In 1988, Richard Donner and Bill Murray brought us a totally reinvented the tale in a modern setting. They kept the main idea, but found a new way to express it. Scrooged focuses on Frank Cross, a self centered, egotistical, power hungry uh…narcissist. He has no concern for his hard working assistant, his long suffering but loving brother or his earnest employees. It’s all about power and ratings. When he airs a dark add to promote his network’s live presentation of “Scrooge”, one employee (a surprisingly sympathetic Bobcat Goldthwait) suggests he should not air it. Frank plays sympathetic, but as Eliot leaves, Frank calls security and has him fired (the film heaps tragedy on Eliot something fierce).

While going through a gift list, he has his assistant send his brother a towel (the other option is a VCR-which goes to the “important” people on the list). That night Frank is stunned by a visit from his old boss who died seven years before, Lew Hayward (Played by John Forsythe). Lew is a big departure from Marley, oh, he’s tortured with a wicked streak, but there are no chains, rather a decayed body (with a mouse!).

He warns Frank of a visit from three ghosts. Unlike the traditional tale we know so well, this story takes place in the waking hours, causing Frank all sorts of embarrassment navigating from his adventures with the ghosts to the real world.

Add the stress of a younger power hungry narcissist (Brice Cummings, played by one of my favorite actors, John Glover) and pressure of a live show, and that puts Cross near the edge. The real brilliance of Scrooge is the three Ghosts.

Former New York Doll member David Johansen plays the Ghost of Christmas Past. He is a witty, sarcastic cigar chomping elfin cabbie. He loves to trip up Frank and clearly thinks Cross is to undeserving of the good things from his past. We see that as a child, Frank’s home was a bleak one. On Christmas Eve, the Cross household is the only one lacking a Christmas theme. Frank’s Father (played by Bill’s brother Brian) is bitter and cold towards his family. A butcher, he gives his son some veal, and heartlessly ridicules four year old Frankie who had hoped for a “choo choo”. They jump ahead to Frank’s early career and also his intro to the love of his life, Claire (Karen Allen) in a cute little sequence, and then we get to see a year later, another Christmas which shows how happy Frank was with Claire. And then we see his misstep. He is so determined to further his career, he pushes Claire away. When invited to dinner with the president of the network (Lew) he is ready to brush off plans he and Claire have. When the Ghost points out that he was crazy, of course, Frank gets defensive, noting that sure, maybe he has made a mistake or two. But he’s not as clueless as the Ghost believes.

Frank goes to locate Claire for emotional support/help. He finds her running a homeless shelter/soup kitchen. Three homeless people join him, and all seem short a few pennies. They believe Cross to be Richard Burton. After pretending to be Burton, he is found by Claire, who offers help, but also has to take care of some things at the shelter. Frustrated, Frank tells Claire to not bother, and offers the advice to get rid of the freeloaders. Scrape em’ off. It a nice echo of the original story when Scrooge is approached by men seeking help for charity.

The pixie like Carol Kane gleefully plays the Ghost of Christmas Present…and she’s quite a little sadist, getting Frank from location to location with copious amounts of physical abuse. She takes him to his assistant’s house (played by Alfre Woodard) where he discovers minor facts like her youngest son doesn’t speak and it’s due to seeing his father killed. This comes as a shock to Frank. “Grace’s husband died?” He believed the year she was wearing black was just a fashion thing. They visit his brother (Played by Real life brother John Murray) and his wife (Wendy Malick), allowing Frank to see how much his brother cares for him.

While one might doubt the love of Frank’s father, the love and adoration of his brother is never in doubt. In a nice play off of the original Dickens story, Frank gets to eves drop on a TV Trivia game (which has a cute payoff in the end). Frank is left by the Ghost in the sewers of New York. There he discovers one of the homeless bums he brushed off, Herman. Frank finds himself frustrated by Herman’s death…angry at himself, at Herman…

Frank once again finds himself stumbling through his set, disrupting things once again. Frank is shuffled off by Brice to his office, under the guise of concern from Frank’s mental well being (it becomes increasingly clear that Brice is after Cross’ job). While resting at his desk, we see the immense Ghost of Christmas Future appearing on the bank of TV screens behind him. Suddenly, in bursts Eliot, who is clearly drunk and has a shotgun in hand, interrupting the Ghost, who backs off. After being chased through the office by Eliot, Cross attempts to get away by ducking into an elevator. There he finds himself face to face with the Ghost. I should note, of all the presentations of the Ghost of Christmas Future, this is my favorite. The Ghost is already haunting because you see little of its face. And it never utters a word (In any variation of the story). But Donner and his team create a unique look, built on the classic “Hooded Ghost”.

You see inside the cloak, but the head is a TV screen. And it has jarring images, jumping images. Often you see flashes of Frank in the screen. In one neat moment, Frank is looking up at the Ghost and you see Frank from the Ghost’s perspective. The images are, again mirrors of the original Dickens’s tale. In one genius moment however, Frank’s words are harshly thrown back at him by, not one of the Ghosts, but rather a future vision of Claire. She has some hungry kids chased away. She is clearly upper crust now. When her friends suggest she is being too harsh, she boldly proclaims that she wasted years on people like those children. “Thankfully” a friend set her straight. Cross becomes very sullen, seeing what his words have done.

He quietly turns to the Ghost, commenting “That was a lousy thing to do” (There are moments in the film that seem to foreshadow Murray’s later roles from films like Broken Flowers or Lost In Translation). Of course, the Ghost shows him his inevitable fate. Frank sees the only people to show were his younger brother and his wife. In a rather frightening sequence, Frank finds himself trapped in his coffin, being sent to cremation.

Frank comes to back in the office. He joyfully overpowers Eliot, and starts to apologize and offers a better pay and a nicer office. And he needs Eliot’s help. This leads to a lengthy speech from Cross on National TV, in which he confesses his failures and screams to the heavens of his newfound spirit. This also opens the door to reconciliation for him as people stare in stunned awe as a Frank they have never seen apologizes to friends, family and co-workers and makes promises of a newfound hope. It’s a sequence that skirts the fine lines of schmaltz and touching.

Murray as the stand in for Ebenezer brings that dry wit that only he has. Frankly, I can’t think of many actors who could have played this role with out leaning either to much into the comedy or being over dramatic. As I mentioned, there are hints of the quieter, more sublime Bill Murray we’ve seen in more recent years, though clearly still the Bill Murray of Ghostbusters. The Ghosts are clever and fresh takes on the original classic motif. In fact, Past and Present are pretty much complete revisionist ideas. I found the use of “Put a Little Love In Your Heart” as an interesting switch from relying on a holiday standard.