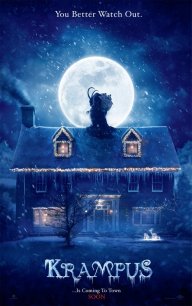 The Krampus is a part of Christmas folklore largely unknown to the U.S., he is not part of our tales of Santa.  It is a popular bit of European folklore though.  But, as the film states, he is the dark shadow of Santa.  Santa rewards goodness, but the Krampus condemns the naughty.

Mike Dougherty, most well known as a screenwriter of numerous super-hero films, this is his second feature as Director.  His first was the very entertaining Halloween themed Trick R’ Treat.  And now he returns to the holiday theme with a Christmas Monster movie.

Young Max is frustrated that his family Christmas is not like it onvce was.  There is fighting, cruel put downs and tension.  After being humiliated with his letter to Santa, Max is angry and heart broken, tearing up his letter to Santa.  He does not realize he has called forth a terrible wish.

The family wakes to discover there was a terrible snowstorm and they are out of power.  And that is not the really bad news.  what follows is the family discovering they are in for a terrible night.

The Krampus and his minions work to take the family to hell.  The thing about Dougherty is he has a skill with letting a horror film have the right amount of dark humor.  The monsters are wonderfully whimsical and creepy, which results in some enjoyable laughs.  I mean, the giggling evil gingerbread men cookies were crazy enough.  The designs are terrific.  The Krampus is almost like a melted Santa…his skin hanging loose, like ill fitting cloth.

The use of a frigid winter and snow are well used.  It is harsh and unforgiving.  The cast (including Toni Collette, Adam Scott and David Koechner) are great.  I genuinely found myself wanting this family to succeed, stop the Krampus and get out alive.

Krampus is a fun and enjoyable ride.  It won’t be winning any awards, but it was great fun for a horror fan.