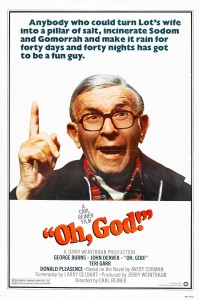 The last hurrah of films from the hard working comic George Burns, I had not seen the Oh God films since the first film was shown to me in Catholic school.

The first film introduces us to hardworking grocery store manager Jerry (John Denver) and his wife Bobbie (Teri Garr).  One day, Jerry gets a phone call to have a meeting.  Upon arriving at the address, he take the elevator that leads to a simple white office with a chair and a speaker.  The voice from the speaker claims to be God and He wants Jerry to be his messenger.

Jerry, certain he is being pranked, tries to find the voice.  After leaving, he discovers that the floor he was on does not exist.  Troubled, but still thinking it might be a joke who heads on out.  Then God starts speaking to him through the radio.  When Jerry tells Bobbie, she tries to convince herself he is not crazy-it’s not like he is seeing things.

And then God appears in Jerry’s bathroom and car.  So, Jerry asks for proof.  Prove he’s God.  Make it rain, Jerry says.  And so God makes it rain-inside the car.  “Why ruin other peoples’ day?” God reasons.  And so Jerry takes on the task of spreading God’s message.

It is a pretty simply Golden Rule style message about treating each other with love and respect.  People think Jerry is crazy, he becomes a public joke, God comes through in the end to provide his defense against a cadre of ministers and psychologists when Jerry is accused by a televangelist of slander.

I like these films.  There is a neat simplicity to the portrayal of God.  Burns plays him as kind, gentle, wise, mysterious, funny and playful and loving.  He is not a God of showy pomp and circumstance, he wears a baseball cap and a windbreaker…and he comes off as playing it by ear.  At one point, Jerry asks why God chose him, especially stumped because h was not a religious man.

God simply says, “why not you?”  Jerry is taken aback by this seemingly careless attitude God has… God asks if Jerry thought maybe he was chosen because he was better than others.  Sheepishly Jerry admits the thought has crossed his mind.  God points out the obvious… he is better than some, worse than others.

Jerry works specifically because he is kind of the hapless everyman who takes the message out to the powerful.   Certainly, there are things that would trouble believers…throughout the series God comments on mistakes he made, such as creating “shame” (don’t know why I ever thought it was needed, God says).  And some would be bothered that the message is generic, rather than specifically Christian.  God makes no mention of needing Jesus, which I suspect would be problematic to certain viewers.

But I find the film and Burn’s approach both endearing and kind of inspiring. God chooses Jerry, though admits he could have chosen anyone.  Jerry isn’t special… and that is kind of the point.  And the most powerful being in the universe takes on the appearance of a frail little man with bad fashion sense.

It also brings up something I have always found to be a bit odd.  If someone walks around and claims to be speaking to God-having honest to goodness actual conversations with God appearing visually and audibly… even Christians think that guy is flirting with insanity at best.  It’s one thing to “feel led” or to think God spoke to you through a song… but say you see God in a physical form and have conversations with him?  That is nutty!

Overall, I found the film to be a fun viewing, even after thirty years.  It’s a gentle, amusing film that can, at times, be challenging.