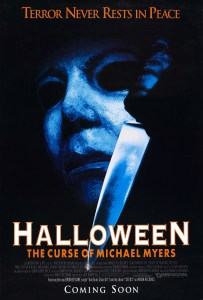 I think it would have been cooler if it had been Halloween:the Musical!!! Seriously, whose heart would be untouched at the sight of Michael Myers dancing across the stage, knife in hand? But alas, that was not to be. The biggest surprise for me in re-watching number six recently? Paul Rudd. Or as the movie says: Introducing Paul STEPHEN Rudd. But yeah. It’s this Paul Rudd. I’ve been a fan of Rudd’s for years, but I somehow forgot he was in this…uh…poor showing.

He plays a grown up Tommy Doyle (the kid Jamie Lee was babysitting in the original). The sixth film tries to ties all the films together. Except three. So follow along for spoilers.

This movie picks up some vague and indiscriminate time after # 5. Some girl is giving birth, surrounded by a bunch of people in robes. Shortly after she is helped by one of the cult members (you got that the people in robes were a cult-right???) to get away. after her escape with her baby, the woman who helped her escape hears a noise and gets scare. She backs away…right into Michael Myers who kills her.

Yes, Michael is part of a cult in this film. Not really a member, more a product of their evil deeds. In every generation there is one and all that jazz.  And so we discover that the girl who gave birth is Jamie-Michael’s Niece from 4 & 5. She is trying to save her newborn kid from Michael. And for reasons…that make no sense?  Said baby is Michael Myers child.  Yes.  Apparently he impregnated his young niece.  Ew.  The film quickly introduces Rudd as Tommy Doyle (who ends up being a somewhat creepy version of his nice guy persona) and the return of Dr. Sam Loomis (Again played by Donald Pleasence-who passed on shortly after the film finished). Another old character is introduced…that of Dr. Wynn, who was last seen in the first Halloween.

This is how it all gets messy. They are trying to tie up loose plot lines from a series that had been off the market for about six years. And some of these questions they try and answer are intriguing. But back to the plot. Michael succeeds in killing his niece, but only she manages to hide the baby and call a radio show talking about Michael Myers. Thank God Tommy Doyle is obsessive and records the show, because he manages to figure out where the baby is hidden.

In the meantime the audience also meets another young woman with a kid. She is part of the Strode family, which apparently all deal in Real Estate, just like Laurie’s dad in the original. And of course, it’s revealed that they all live in Michael’s old house, because in 20 odd years they could not sell the home.  None of the Strode family is aware of this.  They have no clue they are living in Michael Myer’s childhood home.  A girl springs it on one of the Strode family members…and I have to ask… HOW DO YOU NOT KNOW YOU LIVE IN THE MOST FAMOUS HOUSE IN YOUR TOWN’S ENTIRE HISTORY?!

None of the characters draw you in, so each death lacks fear or suspense. n top of that, the film is rather confusing. The cult’s motives seem foggy and there is some hokey stuff suggesting that Michael was a generational thing passed through the centuries. I don’t know, it was a real mess.

Mind you, the producers seem to agree. Apparently, they had meant for something a little tighter for the continuity of the series. It was going to be revealed that the shadowy guy from # 5 who set Michael free was Dr. Wynn. It was supposed reveal that Dr. Wynn had trained Michael the years he was growing up. Afterall, Wynn is a member of an evil cult that…well, has something to do with Michael Myers.

So, in the sixth movie, they seem to have gone down a path that is unalterable. Unchangeable. Myers is not the boogey man. He’s the servant to a cult. Sounds like they are stuck now….right? Why look…a seventh film came along three years later…surely it addressed these things….right?