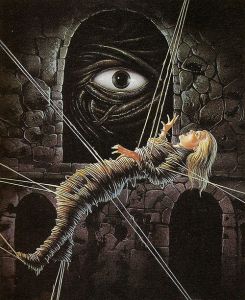 400 years ago, the monks at the Abbey at San Pietro trapped a demon in their basement, sealing it in a small room.  In the present, an attractive young teacher on a visit from America stays at the Abby.  There is a restoration going on, and I think we all know what that means.

The demon is going to get set free.  Strange occurrences begin shortly after the teacher arrives.  Of course, while the monks are aware of the stories of the demon buried beneath, most of them have written it off as legend as well.

They realize, too late of course, that it is not merely a mythical tale.  Soon monks start dying, while Father John (Timothy Van Patton) and the teacher Elizabeth (Laura Schaefer) get closer.   The film has a final showdown between Father John and Satan/The Beast that is mostly talking and Father John getting punched by invisible fists.

One of the high points is the portrayal of the monks.  They are friendly and kind, and with one exception avoid being mere stereotypes.  Ian Abercrombie’s Brother Orsini is a gentle and generous man.  Timothy Van Patton plays a priest struggling with doubt, trying to find answers at the abbey.  He is not finding the answers, and struggles even more watching an older monk nearing death.  He wants to feel a passion for his calling, but it is not there.  Jeremy West’s Brother Marinus is the weak connection, as he seems to see evil in the young woman for being a woman.

At times, Catacombs moves rather slowly.  While not a particularly scary film, the director David Schmoeller makes great use of his setting.  The Catacombs are certainly eerie.  There are several nice creative choices (a bleeding flower, fire and candles are prominent, a sequence where a Jesus statue comes to life).  The music is clearly influenced by the Omen series, relying on chant inspired choirs.  While the film seems to be aiming high for Exorcist territory, it ultimately never quite reaches that level.  It is a moderately entertaining film that makes a real effort.  Even if it does not fully succeed, it certainly gets credit for the sincerity.