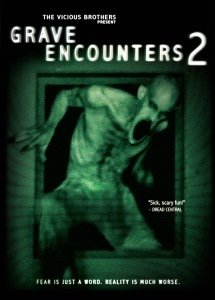 When you start your movie off with a montage of people talking about the first movie over the internet? It is not a good sign. Mind you, I do not mean people discussing the events… they are holding DVDs of the first film in there hands telling you what they thought of the film. While not a terrific starting point, Grave Encounters 2 at least is not patting itself totally on the back, as the montage includes people declaring it both the scariest film ever and the worst film ever.

The first film was one of those talked about found footage films that have glutted the horror market. Better than others, but not not as good as the strongest films in the genre, it ended on a rather cliched note, ripping off a series of horror films a bit to closely to be merely an homage.

Grave Encounters was the supposed true final hours of a reality show crew of Ghost Hunters who were locked overnight in a out of commission asylum (run by a mad doctor who committed atrocities on his patients as these places are prone to have been) where they met grim fates. All that was left was the tapes in their cameras that were pieced together to give us the resulting film.

And according to the opening sequence of Grave Encounters 2, it was just a movie. Here in the real world we meet a film student who is either obsessed with the film or thought it sucked or something. His review gets a hit from a mysterious individual who invites him to visit the asylum to determine if it is all real or not once and for all. So he and his friends sneak off to the asylum, which has apparently been completely unattentded to since the first film.

They set up their cameras and then get freaked out, on their way out the door, they are greeted by a police officer who hears noises on the floor above them. In spite of their warnings, he goes on upstairs…fulfilling the requirement that the black guy goes first.

They find themselves trapped and quickly, several cast members are dispatched. There is much running from spooky children and super tall ghosts, walls expanding and doors disappearing. Luckily, they escape into the basement. There, the three survivors meet Lance-the lead from the previous film who has been hiding in the basement going really crazy.

The spirits pit the four against each other, saying they will allow only one person to leave through “the door”…it is a big red door that, when opened? turns out goes no where. Really. I mean it is in the center of a big room, and when Lance (followed by floating video cameras) opens it? It is not a magic portal…he just sees the other side of the room.

The spirits states that the person willing to finish the spirits’ film… that is the person who goes free. Because, of all the things a spirit wants to do? Make movies is apparently one of them. The film closes with the survivor and the producer explaining this was just a movie, just like the last one.

And there lies the problem of this sequel. For one thing, it is a muddled story with lots of confusing logic. Was the first film just a movie? According to the sequel? Yes. Yet, apparently, the lead actor went missing for months, because he has been hiding in the asylum for the entire time. Nobody noticed he disappeared? What happened to the rest of the cast? Did they disappear? Were not families concerned?

The ghosts spend all their time malevolent-and then suddenly have a specific purpose for their terror? And why kill all those random film makers first? And since when were ghosts skilled at sending e-mail? Imagine the creepy film if the scary ghosts had tricked everyone into killing each other.

Another problem is that it takes forever to establish stuff, so by the time the mayhem kicks in, it feels incredibly rushed. The film spends so much time establishing that the leads like to party and making horror movies. But for long stretches, you might forget you we’re watching a movie about people being terrorized by ghosts. The ending is ridiculously confounding, making no sense. Is the sequence with the lead quietly sitting by while the producer assures us this was just a movie…are we supposed to believe this? Or are we supposed to assume that within the confines of the film, it happened, but the producer is either lying or simply unaware?

Grave Encounters 2 fails to illuminate the story that came before it, and relies on cliches ripped off from previous films (just as the original borrowed liberally the House on Haunted Hill remake, so does this one…including a person killed via electroshock therapy and the previously mentioned ghostly Internet).

There are more weaknesses than strengths here. The performances are decent enough, and the effects work ok (if clearly digital). But beyond that, the plot is a mess, the concept half baked (Blair Witch 2 started with a montage of folks talking about the first film…and Encounters 2 manages to succeed as well as Blair Witch 2) and not compelling.