Oren Peli made his name with the found footage genre-specifically the Paranormal Activity franchise. With the Chernobyl Diaries, he leaves found footage behind. First, the idea of setting your horror movie in Chernobyl is really a stroke of genius. If you have ever seen photographs from Chernobyl, you know there is a sad and haunted feel to them. To use a place that is so shrouded in an unknown quality (mainly since it is uninhabitable) is a terrific notion for a scary film. 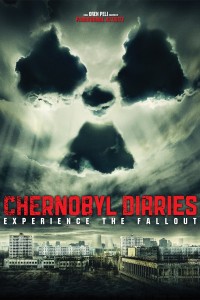 The Chernobyl Diaries is about three young adults visiting a friend living in Russia.  He convinces them to take a specialty tour of Chernobyl.  Along with another tourist couple, they are taken by Uri (an ex-Russian Military special forces) to wander around Chernobyl.  The deal seems a bit shady, as Chernobyl is not open to tourists for pretty damn good reasons.

Uri plays a practical joke at the edge of a small creek, before they find a strange looking fish lying dead on the ground.  Uri had made a comment earlier in the film that nature was reclaiming the land and it starts to look like this is very true.

Uri leads the group around  to various buildings, ever conscious of radiation via a small detector.  As the day starts to draw to a close the group returns to Yuri’s van.  They discover the fan’s engine is destroyed.  As it grows darker, they start hearing strange noises coming from the buildings.  Uri goes outside with a gun, and after hearing gunfire, two of the young men rush after him.  They soon return, one of the young men wounded from an attack by rabid wild dogs.    However, dogs are not the primary threat.  The friends are not alone.  When the sun rises, they decide to try and make their way to the nearest checkpoint to get help.  They leave behind their wounded friend and his girlfriend.

As they try to find Uri, they slip deeper inside the buildings.  Eventually they discover Uri’s remains and find themselves on the run from something else.  They start losing light and return to the van to find it it completely totaled.  They find that a video camera is still running and watch the footage.  Something has taken their friends.  They hear screams, so the survivors run towards the noise.  They find the girlfriend, and the chase begins.  It turns out that Chernobyl was not abandoned overnight after all.  Some people stayed behind and became mutant hillbilly cannibals.

And that is where it just starts to fall apart.  It turns out that they were inside one of the reactors, causing the leads to rapidly fall ill with radiation poisoning.  How have these mutants survived so long apparently living in the reactors and apartments nearby?  And cannibal mutants?  Hasn’t that idea pretty much been rammed into the ground?  The sense of mystery seemed loss.  It would have been more interesting had the mutations been something other than diseased humans.

It is also a bit hard to follow, at times you would think you were watching a found footage film in the jerky camera moves where it seems like the cameraman is rushing to catch up with the characters.  It certainly has it’s entertaining moments (Uri is a fun character) but the story becomes less compelling as you start to know more of what is happening.