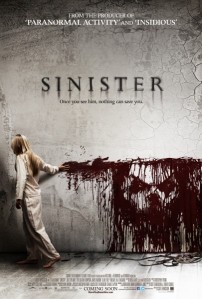 Last year, a movie called Insidious was released.  Director Scott Derrickson saw that and set about discussing ideas with the guys who produced Insidious.  What Derrickson and his team have produced is Sinister.  What exactly is it?

Ethan Hawke is Ellison, a real crime writer who  hit it big with his first novel (partially because it helped expose shoddy police work and free an innocent man) but has seen decline in the years that followed.  This is hot home in that the only book people ask him to sign in the film is that first book.  He believes that if he can just find that one story for a new book…he can return to that former glory.

To this end, he moves his family into a home where the previous family was murdered and one of the children disappeared.  Ellison hopes to crack the mystery, maybe even help find out what became of the missing child.  To make this possible, he moves his family into the very home where the previous family was killed.  When setting up his office, he goes into the attic, and discovers an old box marked Home Movies.

In the box, Ellison finds a set of super eight films and a projector.  This discovery sets in motion a series of events that leads to a most inevitable ending.  As he watches each film and starts to research what he sees, he finds the story growing and growing into something…terrifying.

As thrillers and horror films go, Sinister is a strong story.  It uses some risky devices, and in a lot of hands, this might have become a Hostel style gore-fest.  Instead, Derrickson will often shy from graphic violence in favor of unnerving the viewer.  In one scene, we are focused on Hawke- causing the screen behind him to be blurry-we know what’s happening, but Hawke’s horror is telling us what we need to know.  And another nicely shot reflects a portion of the screen in Ellison’s glasses.  The film quickly will cut away from possible gore, yet not hide from the horror.

The audio of the film really absorbs the viewer.  It is hard to tell where sound effects and musical queues are ending or beginning.  Music will be punctuated with a sound that relates to the (silent) super 8 image (such as a lawn mower).  You will hear woven into the music the sound of the super 8 projector.  The sound department and composer Christopher Young provide support to Derrickson’s story that pull you inside the story.  There are musical moments still worming through and haunting my brain.

Derrickson, his cinematographer Chris Norr and film editor Frédéric Thoraval create an incredibly strong visual sense.  The repeated choppy shots of Hawke splicing film or threading film through the projector creates a frenetic sense of urgency and he works his way through each horrifying film reel.  There is a wonderful shot of Hawke falling asleep on his couch and the scene going from night to day.

Throughout the film, Hawke’s Ellison talks about his legacy, his desire to have one more shot.  His wife struggles to reach through that to get him to see his family should be his center.  The problem is, he thinks that is exactly what is driving his desire to break down the wall of success.  It’s for his family.  We get to see footage of a younger Ellison being interviewed where he argues bringing justice trumps any feelings of fame and the importance of family over fortunes…we see he has lost his way these things…or maybe he never believed them in his heart.

Along with Ellison’s struggles between the hope of fame and his family, there are metaphysical questions regarding spiritual things, media and how it changes the nature of human kind.

In light of the various themes, the film’s final spoken line is both tragic, chilling and apropos.

Sinister is a powerful experience.  Along with the visuals and audio, Hawke is compelling in his role as a man unraveling.  He is grasping for a hand to grab hold of, but he’s being dragged further into a despairing abyss.  I would have to say this is probably the best serious horror experience I have had this year.

Also, a movie monster that is a snappy dresser.  Love those.