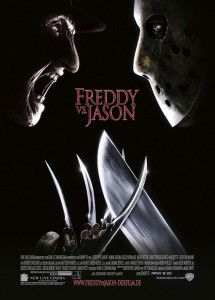 For about a decade Newline tried to come up with a movie bringing Freddy Krueger and Jason Voorhees together in a single film.  There were a lot of false starts.  It had been awhile since we saw film franchises cross (Aliens v Predator was still a year away).  You had to expect that in the end, this would probably be terrible.  When they announced Ronny Yu would be directing, that offered some hope, as his Bride of Chucky was actually quite entertaining.  The news that while Englund was back, Kane was not left more than a few fans disappointed.  Watching the completed film?  I actually had fun. Sure this ain’t high art. But it was funny, energetic and kind of interesting. The effects were pretty solid overall, though some moments were clearly computer generated. And the Jason Mewes clone(I kid you not…I expected him to yell “Snootchie Bootchies!”) was a bit ridiculous.

I think Kane Hodder brings a bit more personality to Jason than Ken Kirzinger did.  Part of that is that Kane is a six foot, broad wall of muscle.  His Jason is large and powerful looking.  Kirzinger is a bit taller and less broad…his Jason look much taller and sleeker.  The same can be said for Derek Mears from the 2010 remake of Friday the 13th.  These guys were not bad…but they were not Hodder.

There was a generous amount of nudity, for those who feel that is important to a slasher flick(I do not fall into that camp I am afraid). This is clearly more of a carryover from the Friday the 13th series…there’s nudity in the Elm Streets of course…but not to the degree that there is in a Jason flick.

For Jason, this is a redemption of sorts from the painful Jason X. Thankfully, that took place far in the future and this movie could happily ignore it.  The writers found a pretty interesting way to bring the characters together.  Freddy had lost access to his power, the kids of Elm Street are drugged and no longer dreaming.  So to cause them to fear again, he resurrects Jason and sends him on a murder spree.  but when Freddy is finally strong enough, he finds Jason out of control-killing Freddy’s intended victims.

So Freddy embarks on a mission to take down Jason so he can get back to his own killing spree.  Meanwhile, Lori (Monica Keena) and her friends are trying to figure out how to stop Freddy and Jason with the help of a local cop (Lochlyn Munro) who transferred in from the Camp Crystal Lake area.

Englund slipped right back into the role of Freddy. Cracking wise and being generally vicious. But he pulls it off…Freddy seems a little darker than in the sequels that followed the original. Not a comedian who kills…and some of the facial reactions he pulls off under that makeup is great.  There is a great moment where he suddenly realizes he has been pulled into the real world, and Englund’s expression is that of genuine fear.

As I said towards the beginning, this is a fun movie with a lot of energy, mostly for fans of the franchises, but horror fans in general should be able to find stuff to like.