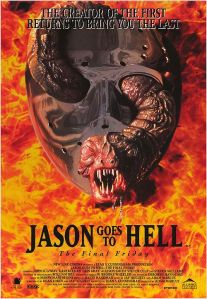 I like the title. It doesn’t warn you that it is NUMBER NINE in the series.  And by golly, it is the Final Friday!  This is the end of the series.  For sure.

But here is the twist. Jason is not…dead. Oh, wait, that’s not a twist? Shoot. At the autopsy, a familiar character actor sees Jason’s still beating heart and eats it, thus transferring Jason’s essence into his body. How is that for a twist?! See, Jason wears bodies like I wear a suit. Poorly. We also meet our young hero, John LeMay (who has gone on to an inspiring career playing such roles as…um…I am not sure). He is in love with Wilma Deering’s daughter (Kari Keegan, you might remember her from the uncredited role of “former girlfriend” in Jerry Maguire-NO?), even though they broke up.

Then there is The Bounty Hunter (Captain Fuller from 21 Jump Street. Oh, and Mr. X on the X-Files. My friend Rob would be heart broken if I forgot to mention that). He’s a wacky bounty hunter who speaks in crazy metaphors and is an expert in all things Jason. He is just waiting for someone to pony up enough cash to catch Jason.

This film is a crazy mess of a film.  The story makes no sense and an all new back story is invented for Jason.  Suddenly he is a body hopping spirit aided by demons.  Special knives are now required to end Jason.  He suddenly has additional family members.

The film attempts to wink and nudge it’s way through working hard to be self aware.  In one scene, we see a guy and girl getting it on. She says he has to use a condom, he whines, so she says “what the heck” and throws the condom out of the tent.  And for that, Jason guts her and her boyfriend. As Jason walks away, his boot grinds the unopened condom into the mud. How this never became a safe sex ad on TV is beyond me.

In the end, the ground opens up, giant hands grab Jason and a light shines down from heaven, Jason is sucked in to the earth, leaving behind only his hockey mask. LeMay and Keegan walk off (with the baby). Suddenly, a clawed, gloved hand bursts from the dirt, pulls the mask into the ground and we hear Freddy cackle. This started the hopes of horror fans everywhere for a Freddy and Jason movie.  And then eight years later we got…a sequel without Freddy…