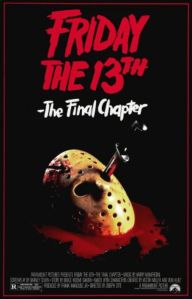 Part four has my all time favorite sequel subtitle. The Final Chapter. You know how many Friday the 13th movies there are? Ten. Eleven if you count the Freddy/Jason movie. And number four is the final chapter. So everything after that is apparently an addendum. Sure, other movies have had a “final” movie that was not so final. Freddy’s Dead: the Final Nightmare. The Omen 3: the Final Conflict. Children of the Corn 2: the Final Sacrifice. But I believe the Friday the 13th Series has the distinction of doing this twice. And most of those films only got one or two sequels after the “Final” sequel (the exception is Children of the Corn 2. If you think I will sit through those you are sadly mistaken. I know my limits). So I love the title.

Plus, this movie has all the things people love to see in movies. A precocious kid (Corey Feldman!), hot twins and a dog. Oh, and Crispin Glover.

Our story picks up directly after Part 3. Jason still appears to be dead. Apparently, when the two squad cars left the body of Jason unattended, they called in SWAT, the army, the Guardian Angels and paramedics. So they bring Jason to the morgue. Apparently they don’t question the appearance of death on Crystal Lake. He’s not hacking at you with a machete. Must be dead. So of course he gets up and kills the morgue attendant and his girlfriend nurse. Apparently they assume he is dead without checking as well.

We then jump to the next morning. In spite of the death toll in Crystal Lake, it appears people still feel safe living there (this marks the second film to diverge from the camp counselor theme). A single mom, her teen daughter and pre-teen son (Corey Feldman!) all live by the lake. The son is a special effects genius, which is totally not that hard to buy. After all, it’s totally plausible that a ten year old kid is making elaborate latex masks and high tech special effects, right? What else is there to do when you live next to a lake? They meet a group of kids who are staying at the house next door. Mostly more realistic teens who talk about nothing but sex and have skinny dipping parties in front of the kid (Corey Feldman!). See, the kid (Corey Feldman!) is kind of a perv. We get the point when he is in bed and looks out the window to see one of the hot girls next door remove her shirt. He does not just watch. He starts slamming his face into a pillow and laughing excitedly. And jumping on the bed. He’s a little horndog, that kid (Corey Feldman!).
Then the kid’s (Corey Feldman!) older sister meets a bounty hunter, well, we don’t know that yet. But eventually we find out he is there to kill Jason. If you have seen the first three movies, you know where that is going. He is kind of the teenage girl’s romantic interest. He appears to be about thirty one. Nothing creepy about that. As soon as it gets dark, Jason gets his kill on. The director tries new things in horror. Well, one new thing. Instead o a nubile beauty being killed in the shower, it’s a pretty boy. A young Johnny Depp type (Before we knew what a Johnny Depp Type was). Of course, the girl he showered with still dies.

It’s all pretty routine. Although there are the attempts at humor. Crispin Glover yells out for a corkscrew to open a bottle of whine and Jason plunges it through his hand. Bwahahahahaha! The bounty hunter guy gets killed in the basement. Then we are down to the Sole Survivor and her kid brother (Corey Feldman!). She is alone in the house running into dead bodies. She opens one door and there is a body laying on the porch. Apparently that dead body is booby trapped, because the Sole Survivor does not dare walk around it, she instead slams the door and runs around the house looking for a way out-eventually using a window. She runs back home and shuts the door. That will show Jason. They are safe now in the house with lots of big…windows…aw crap. Jason jumps in and chases the youngins’ up the stairs. Remember, Jason ain’t dead yet, he can still run.

The Sole Survivor keeps telling her kid brother (Corey…oh you get the point) to get out of the house. Other than that she screams a lot. It’s really weird, because it isn’t natural sounding at all. She looks left, and screams. Looks right and screams. Looks at Jason and screams. Looks at her agent and screams. Then she turns and run down the hall and leaps through a window. That’ll teach Jason. The kid is hiding in the bathroom shaving his head. That’s what kids did in those days. Jason went down stairs to check on the Sole Survivor who is, indeed, alive. But not for long, Jason starts pushing her around and is ready to kill her when the kid starts yelling for Jason. He turns around to see the kid, now really bald, looking at him on the stairs. This confuses Jason. In part two it was established that Jason can’t tell his dead mother apart from a blonde college girl if she wears mom’s sweater. Apparently, if Jason sees a bald kid, he might think it’s himself standing there. Yeah, Jason is kind of stupid.

The Sole Survivor grabs Jason’s machete and runs up from behind, swings and…knocks Jason’s hockey mask off. Yeah. Anti climactic, I know. Jason looks completely different from the third film, in spite of the fact that it is a lousy whole day and a half later. Jason reaches for her, which gives the kid the moment he needs. He grabs the machete and swings and unlike his sister actually has the ability to HIT his target. He plants the machete deep in Jason’s skull. Jason stumble and then falls face first to the ground. This allows the machete to go deeper. This insures that we see Jason is d-e-a-d. There is no way he is ever coming back. So the Sole Survivor is technically not the sole survivor. The movie ends with the two hugging in the hospital (we have a first, the last girl alive doesn’t flip out in this one, folks!). How sweet…well, until they cut to the close up of the kid with that homicidal gleam in his eye.

Oh, and whoever owns the rights to the Friday the 13th franchise, take note. Corey Feldman (!) makes it clear he wants to pull a Jamie Lee Curtis and return to the franchise for a battle to the death against Jason. Which is tough to do, since if you do the Halloween: H2O thing, you ignore the sequels that came after your film. Which means Jason is still dead. Oh, what is that you were saying, Mr. Franchise Owner? You had no interest in doing that? Glad to hear it.