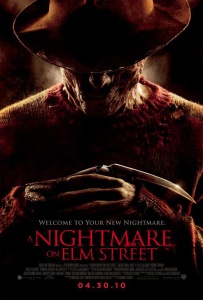 The best two things about the reboot of Nightmare on Elm Street?  Jackie Earl Haley and the opening credits.

Otherwise, as with other recent franchise rebooting remakes it is pretty by the numbers.  It jumps in quick, and a bit disjointedly.  Kids apparently hang out late night en mass at the diner where Nancy works.  A kid falls asleep and then appears to kill himself.  The kids go to the funeral and it’s off to the next death.  This is inspired by the highly effective sequence in the original where Tina dies in bed with her boyfriend.  But where that was gritty and uncomfortable and painful…this sequence feels safely faked.

While the police are quick to arrest the boyfriend of the dead girl, he gets a chance to warn Nancy.  Unlike the original, the kids figure out instantly that if you die in your dream you for realz!  The first movie had Nancy and Glenn (Johnny Depp) trying to determine the truth of the situation, but not sure they could trust Tina’s boyfriend.  Here it’s no challenge and they are on their way to figuring out the truth about Freddy.

Kids die, but it is hard to care, because they lack distinctive identities.  Though, in one well written moment, after destroying a kids heart, Freddy gently explains that a brain can function for seven minutes after the heart stops.  Freddy notes, with relish, that they still have six minutes to play.  End scene.  And had the entire film played out like this?  It would have been one of the most unnerving films of the year.

After all, Jackie Earl Haley makes Freddy menacing.  At no point is he campy-even when delivering a typical Freddy-esque line.  Haley was perfect casting, and yet, he is working with a cast that is Twilight-lite.  Sure, you have good character actors in the adult roles (always nice to see Clancy Brown in a movie).  But much like another remake of a Wes Craven Film (The Last House On the Left) the improved effects and technology results in a glossy and less effective film.

One thing that stood out was the trailer suggested Freddy was possibly an innocent victim, and while the film briefly flirts with this, it quickly makes it clear that Freddy was a child molester.  Not a child killer, mind you.

Frankly, I think I would have given the film more credit had Freddy been an innocent.  If Freddy had been a kind and gentle man who loved kids, only to be killed by a mob of angry folks whose righteous anger was fueled by a falsehood that led to the cruel death of a decent man… and that action created a monster worse than what they thought they were ridding the world of?  That would have been a rather daring take on the character.

But instead, the filmmakers go for gloss and a safe veneer.  Unlike the Friday the 13th remake (I’ll discuss that one later), the film is more conservative in things like gore and nudity.  This of course is not really a bad thing, they tried a less exploitation fueled approach, and I would have applauded them for it had they made a more effective film.  But instead, it just makes it clear what a bland approach was taken here.

I mentioned the opening credits, and they are downright beautiful and artistic.  We see shadows of children playing, hands stretched to mimic Freddy’s infamous claws.  It’s highly effective imagery and a real shame that the new film could not match up to it’s opening credits.