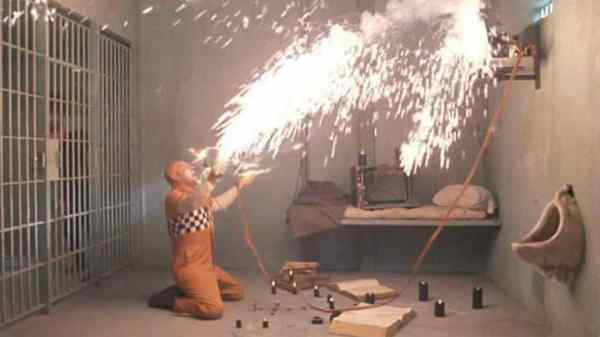 Shocker, Wes Craven’s follow up to the Serpent and the Rainbow is the entirely opposite animal. The story is that one night high school jock has a nightmare that a serial killer is murdering his family. He awakes and rushes to his family’s house where he is met by his police detective father who informs him their family has been slaughtered by the notorious local serial killer.

Using his dreams, Jonathan and his father ultimately identify and catch TV Repairman Horace Pinker. The evidence is damning and Pinker does not plead innocent, so it is a pretty slam dunk case. On the day of his execution, the guards find he has some elaborate set-up going on in his cell with his TV. While they fear he is killing himself, the audience can see he is performing some sort of ceremony.

Once in the chair, he uses his final words to to reveal that he is Jonathan’s real father. After the electrocution seems to go very wrong, they find Pinker is dead. But it turns out, Pinker’s body may be dead, but his spirit is alive and he can take over bodies.

Pinker and Jonathan begin a game where Jonathan hopes to find a way to stop Pinker’s new rampage, one where he can be anybody.

Where Serpent and the Rainbow was an attempt at a more serious film, and just a one off tale, Shocker feels like a blatant attempt to start a franchise with a new Freddy Krueger in Horace Pinker. But the inspiration is obviously from the late era Freddy. Pinker is a violent psychopath with a one liner for any situation. The dream connection feels like Craven was not even trying to set Pinker apart.

I enjoy a lot of the characters, even though the majority of them are fodder for Pinker to kill in his attempts to destroy Jonathan’s life. But without a doubt, Mitch Pileggi seems to be having a good time in the role.

Shocker gets incredibly goofy, as Horace can jump through TV signals as well as bodies. So when we see him outside of bodies he is transparent and has a static effect applied to him. When a person is possessed, the tell is that they have Pinker’s limp. I am not sure why his spirit would have a limp…but whatever, it is his tell. The goofiness goes off the rails when Jonathan and Pinker are flying in and out of TV shows and TV’s (landing in random living rooms, impacting television shows). And honestly? This is what kind of saves the movie.

While it lacks any nuance or deep themes, Shocker is a ridiculous and fun movie with a rock and roll soundtrack. I am almost a bit sad we never got Shocker’s two through six.

The Masters of Horror series aired on Showtime.  The Masters of Horror is a gathering of Horror Directors, it is a loose conglomerate of folks in the Horror community started by Mick Garris.  The idea behind the show is various popular horror directors contributing a short horror film (an hour long or so).  Admittedly, some directors were not primarily doing horror at this point (such as Joe Dante, who had not done a horror film in quite some time) or was not primarily known for horror (Session 9’s Brad Anderson).  And noticeably missing was George Romero.  But they did get John Carpenter for a good one and one really ham fisted political one.

Dance of the Dead 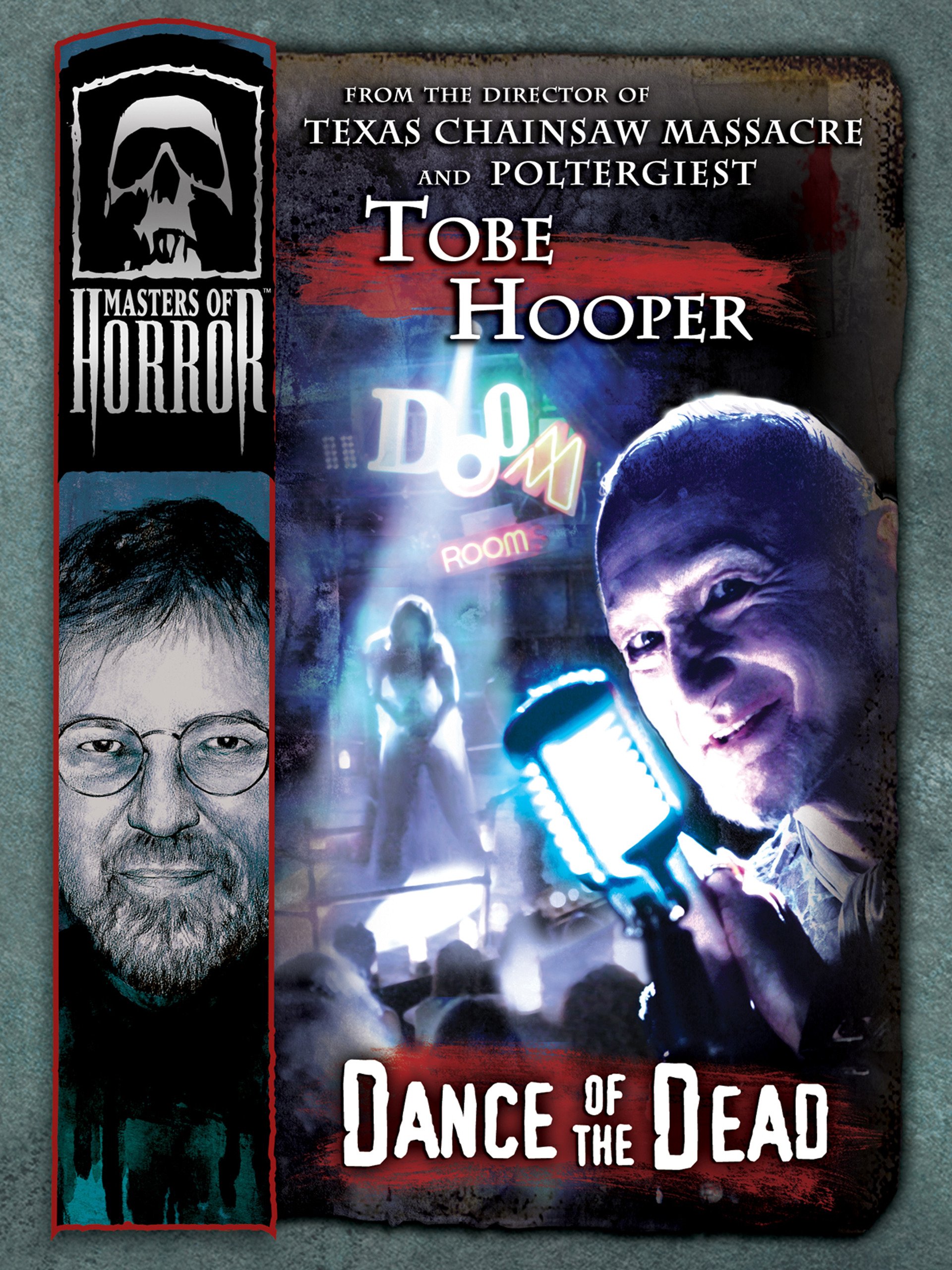 The fourth outing for Hooper and Englund, Dance of the Dead is a post apocalyptic story.  After a generally society  ending war, kids run around being hoodlums.  A young woman, Peggy, works for her mom in a diner.  Her sister appears to have a mysterious condition that makes her a pariah of sorts. She meets one of the “good” hoodlums.  We know he is good because he respects her mother’s wishes and talks back to his friends.

Her mother believes that nobody is any good except her daughter, trust nobody else is her message.

The dead also walk in this wasteland.  There are clean-up crews that gather them up and burn the animated bodies.  But this is not the only use.  Robert Englund  is the Ringmaster of a club where they make the dead dance for entertainment.    the club is the kind of post apocalyptic bondage club we have seen throughout sci-fi history.  And there is nothing to set it apart.  Englund has some fun with his role, but this film is not about him.

Dance of the Dead feels largely pointless, and takes forever to get going.  In an hour long story, long slow scenes a re a death knell.  If it is a satire or exploration of mankind’s darker tastes in entertainment…it sure misses that mark.  Is it about teen rebellion? Rebelling against repression? Maybe.  But the film feels largely empty and without meaning.  And not in the darker meaningful sense where it is upsettings or subverting our expectations.  It is simply cotton candy…and bland cotton candy at that.

The ending is very dark, and would have been really powerful had the set up been better. 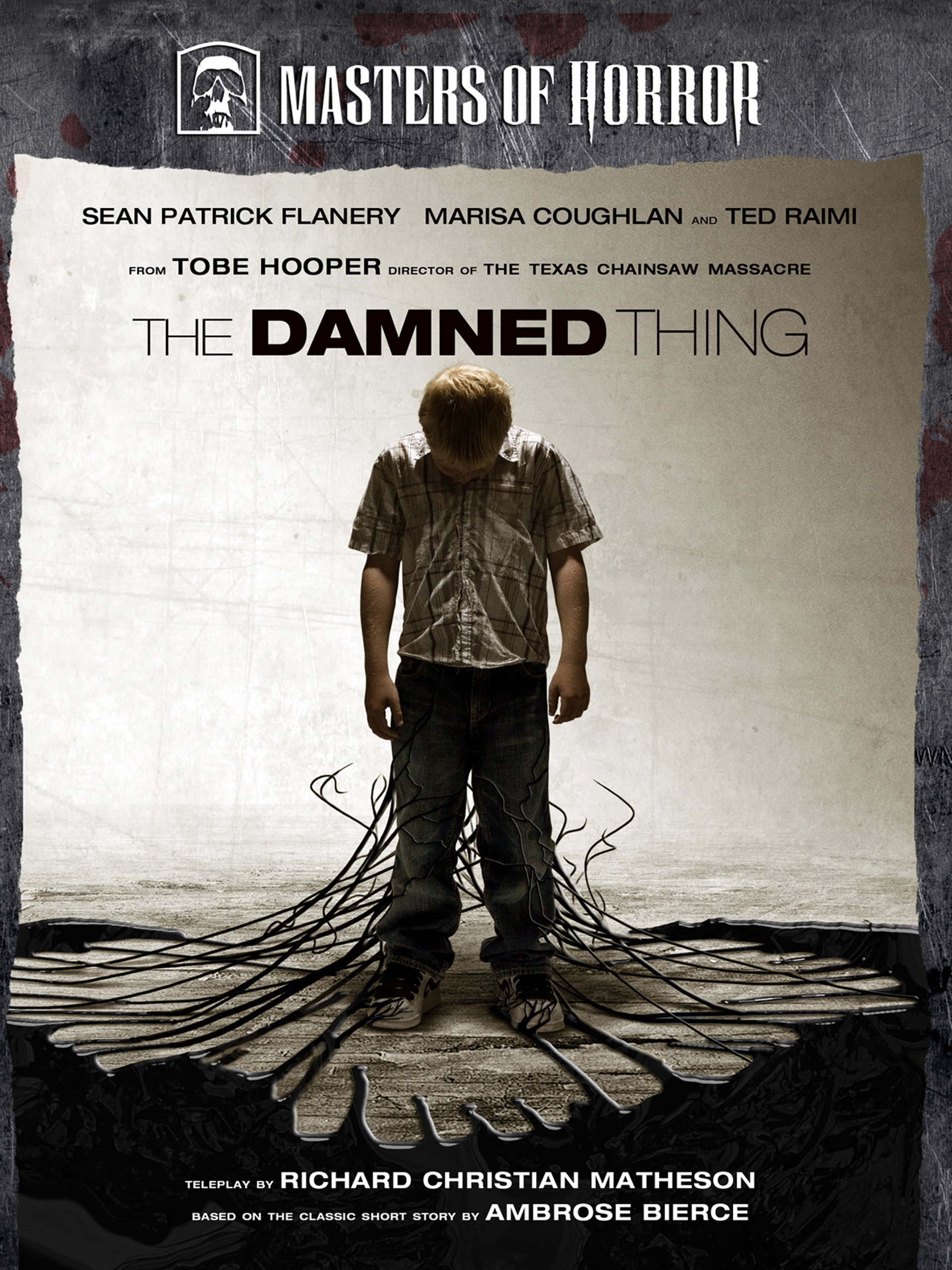 The Damned Thing was written by classic sci-fi and horror writer Richard Matheson and based on a short story by Ambrose Bierce.  Sheriff Kevin Reddle has a dark history.  As a young boy, his father killed his mother and tried to kill him.  Decades later he is married to Dina and they have a son.  He secretly suspects there is an evil force that caused his dad to try and kill the family.

At first there is little proof, and he questions his own sanity.  But as the town starts to experience aggressive outburst, Kevin becomes certain that there is a force, one that feeds on people’s fear and anger, turning them into violent killers.

Sean Patrick Flannery gives a good performance here, especially as Kevin sinks into the overwhelming power of the “Damned Thing”.  Hooper shows the sparks of his stronger works here.  He makes good use of the environment and his setup is very effective in making this one of those southern feeling horror tales with talks of generational curses and the like.

This is probably the strongest of all of Hooper’s later works.

Based on a short story by Clive Barker called the Forbidden, Candyman is a film about urban legends.  Helen Lyle (Virginia Madsen) is a grad student who is doing a thesis on urban legends.  She discovers a legend within the tenements of Cabrini-Green of the Candyman.  Borrowing from the famous Bloody Mary, the belief is that if you look in a mirror and say his name five times, Candyman appears behind you and guts you with his hook.

As Helen becomes more obsessed with delving into the heart of the Candyman myth, she starts to miss signs that other parts of her life are falling apart…especially her marriage.  Her husband has an ongoing affair with one of his students.  Candyman seems drawn to Helen, and commits murders to frame her.

Candyman is a pretty unique film, as it focuses on black urban communities (as did Wes Craven’s The People Under the Stairs a year earlier).  The short story was set in England, but director Bernard Rose (Immortal Beloved) felt setting it in America would be a better and more appropriate choice.    And the setting of Cabrini-Green was a masterful choice.

The film is highly effective.  The backstory of the Candyman makes him and effective and tragic monster.  The son of a slave, the Candyman had grown to prominence as an artist.  He was renowned for his portraits.  He fell in love with and had a child with a white woman.  A mob chased him down, severed his hand, covering him in honey and replacing his hand with a hook.  As he is dying, he is covered in bees…ultimately dying from the stings.  This creates a powerful visual, as the Candyman is often covered in bees.

Much of what makes this film work is Tony Todd.  Todd plays the character as charmingly regal, yet very menacing.  Eddie Murphy had been considered for the role, but thankfully he was out of the price range.  Because Tony Todd makes the character work in a way few actors could have.  The film is definitely a gorefest, so the squeamish may wish to avoid the film.

Candyman adds to the pantheon of great monsters and is a solid fright film.