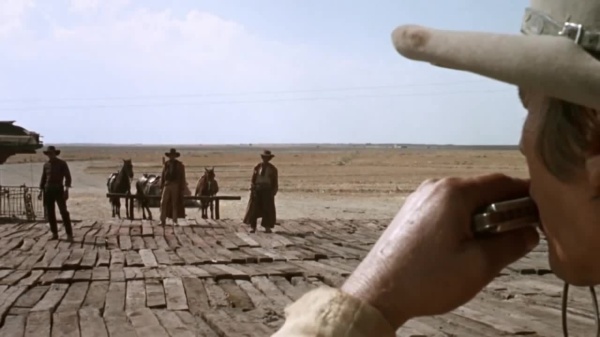 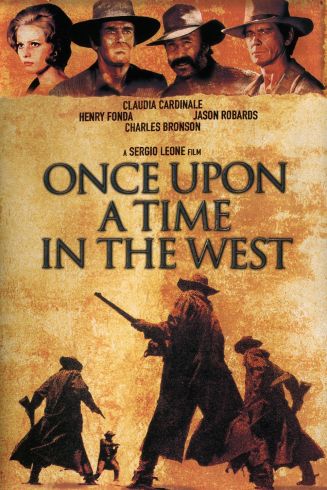 Once Upon a Time In the West specializes in a big trait of Sergio Leone’s work…patience. The film opens with a scene of three men waiting for a train to arrive.  Everything is quiet, with hardly a word spoken.  Only the sounds of a rickety windmill and water dripping onto a hat fill the soundscape.  The three men’s motives uncertain.  And we wait.

And it is amazing.  This could, and frankly, should be a terribly dull sequence…but the tension keeps building until the train arrives.  And all we see is a man toss a bag off and the train moves on…but it is the reveal of what waits behind the train.  We see a lone man standing before the other three.  In a great bit of snappy dialog, the stranger notes they only brought three horses.  One of the thugs laughs and says they are a horse short.  After a pause, the man replies “You brought two horses two many.”

Once Upon a Time in the West follows  the story of a young woman named Jill.  She has arrived to be with her new husband and his children, only to discover on arrival the an and his children have been murdered.  A railroad baron and his associate want her land, but two men have stepped in to challenge the crooked men. Cheyenne and “Harmonica” have different reasons for coming to town, but they unite to help Jill (while fulfilling their own plans).

Leone knows how to do an introduction.  With Robard’s Cheyenne, he goes for a humorous introduction.  We see Jill in a Catina talking with the owner, when they are interrupted by the sound of a gunfight.  We never see it, only hear it, and it’s comic effect hits home as Cheyenne walks through the door full of swagger.  In the same scene, we see a shot of Harmonica (Charles Bronson) sitting in the corner.  There is a swinging lamp and the light and shadow dance across Bronson’s face poetically.

Henry Fonda’s villainous Frank (a gang leader who has adapted to the business world of the railroad barons) is charming and frightening.  Claudia Cardinale is lovely in every scene, but it is not simply her beauty that the character brings to the table.  She is a strong and dominant force in the film.

So many things that seem like they would have been fine as simple character affectations actually have deeper meaning and connections. We never learn Harmonica’s name, instead, when Frank grills him for who he is, he replies with the names of men Frank has killed.  And his harmonica playing has a dark twist added.

Ennio Morricone produces another wonderful soundtrack.  Harmonic’s playing is woven into it and it is some of the simplest and most haunted sounds you will ever hear.

The film is long, and I get why some find it to slow moving…but to me, this is part of what makes it such a rewarding viewing experience.  Leone gives you the opportunity to soak in the environment.  It is a film worthy of the term “Classic Western”. 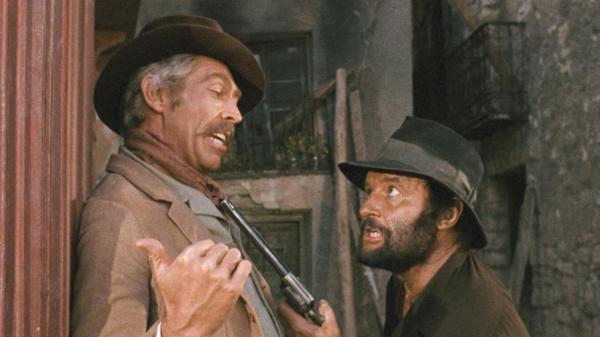 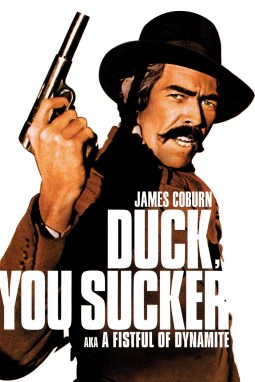 Originally called a Fistful of Dynamite, Duck, You Sucker is Sergio Leone’s fourth Spaghetti Western, the first without Clint Eastwood.  While a certainly more “poetic” title, Fistful of Dynamite suggests a tie to the Man With No Name films when one does not exist.

Duck, You Sucker (a line repeated throughout the film) is the tale of a Mexican gang with a plan to rob a bank who stumble across an explosives obsessed Irishman. They get paired up when Juan Miranda’s gang damages John Mallory’s motorcycle.  Miranda thinks he can help them pull off a major heist.  But Mallory has plans of his own, and uses Miranda’s greed to get them all drawn into the Mexican revolution, something Miranda has no desire to be a part of.

About the first half is very entertaining.  This has all of the flourishes of the Man with No Name films, with an added does of humor.  Leone gives us insanely close up close ups.  Beautiful long shots of the rugged land.

Mallory is not a mystery man.  He is a member of the Irish Republican Army in hiding.  A lot of humor comes from James Coburn’s glee in the role. Steiger (playing Mexican gang leader Miranda) is a bit more uneven.  Sometimes he is tough and wily…others a racist caricature of a Mexican Outlaw. He is at him best when his character turns serious regarding why he has no interest in revolutions.  The people who read books tell the poor what they need to do and then leave the poor to suffer the consequences.

Unfortunately, at this point the film starts to get into long and more drawn out scenes and flashbacks. While meant to give insight into Mallory, instead they just confuse things.  At nearly two and a half hours, the film could use some trimming to make everything tighter.  A revolutionary and a man who wants none of it makes for a compelling story, especially as their friendship grows. I just wish the second half had been as strong as the first.

However, the Ennio Morricone soundtrack is terrific all the way through. 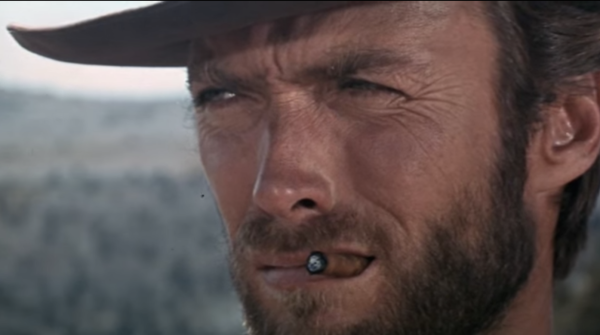 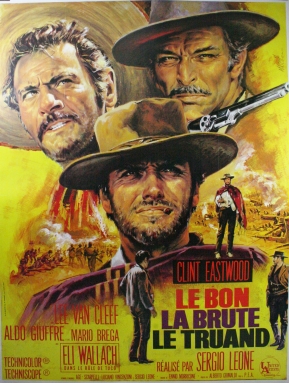 The third film in the Man With No Name trilogy finds Clint Eastwood and Lee Van Cleef returning.  Interestingly, Van Cleef is playing a different character in this film. This time around he is the untrustworthy villain Angel Eyes.

Eastwood’s Blondie (the film’s “Good”) is introduced as a bounty hunter who captures the violent criminal Tuco (the titular “Ugly”).  He turns him in to the authorities and collects the bounty.

But the film then takes a twist when we see Blondie save Tuco from a hanging.  They meet up and we discover they are in cahoots.  Blondie catches Tuco, collects the money and helps him escape so that the bounty on his head increases and they can do the whole act over again in a new town.

The two run across a carriage of dead people.  They discover a lone survivor who provides information about a huge stash of gold hidden in a cemetery. Tuco finds out the name of the cemetery, while Blondie finds the name on the grave that holds the gold. The man dies shortly after.  It turns out there was another man after him, the film’s “Bad”, nicknamed Angel Eyes.

The three form an uneasy alliance to find the gold and split it three ways.  Of course, greed interferes with their teamwork.

Ennio Morricone scored all three of the Man with No Name films, as well and a seemingly endless list of films.  His musical choices are beautifully sparse.  He is not afraid of quiet or “solitary sounds”.  The fact is, when you think of classic western soundtracks, you are most likely hearing Morricone in your head. And rightly so.

One of the things that stand out about Sergio Leone’s films is the wonderful talent he has for framing faces. In the Mexican Standoff between the three leads, it is a combination of extreme close-ups and distant wide shots that increase the intensity.

I noted the fact that Van Cleef plays a totally different character in this film.  But the truth is, I am not entirely sure that Eastwood’s Man With No Name is the same character in each film. The character of Blondie feels a bit different from the prior films in his coldness.

If there was one criticism I could offer, it is the length of the film.  Clocking in at three hours, The Good, the Bad and the Ugly can feel to drawn out.  It could have benefited from a bit of editing to make the film tighter and allow it to move a bit faster.

One of the more interesting little bits of trivia is that there is a sequence where Van Cleef slaps a woman.  They actually used a stunt double because Van Cleef stated his personal philosophy is that he doesn’t kick dogs and will not slap a woman on screen. 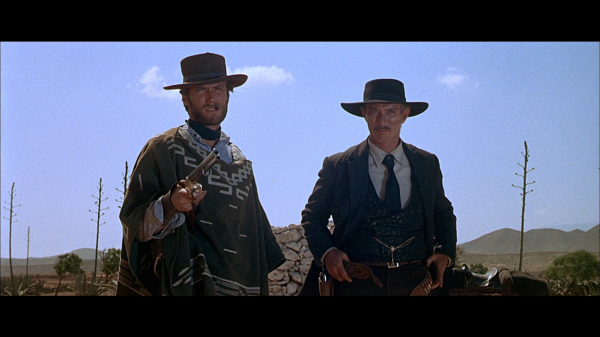 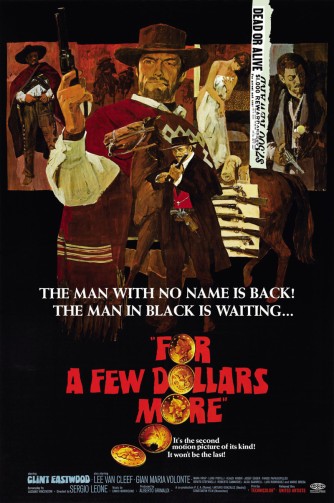 Eastwood returns for another round as the Man With No Name.  For a few Dollars More finds him living the life of a bounty hunter.

The film opens by introducing us to Col Douglas Mortimer. On a train a man is trying to talk to him, but Mortimer shuts him up by lowering a bible and revealing an icy stare (Lee Van Cleef has a steely eyed squint that can rival the intense gaze of Eastwood).  Mortimer has arrived in town seeking to catch local gang leader El Indio.  At the train station a man tells him nobody has had the courage as of late to try and catch El Indio…only to watch Mortimer grab the wanted poster without hesitation.

The Man With No Name finds himself at odds with Mortimer, but ultimately, they agree that to take down El Indio and his gang, teamwork might be the best route.

For a Few Dollars More leaves the Man With No Name as much a mystery as Fistful of Dollars, and that works in the favor of the character.  The less we know, the better.  Van Cleef is a perfect co-star for Eastwood, with both characters being charismatic and engaging.

The film employs humor effectively, never making a joke of it’s leads. Early on Mortimer breaks into a hotel room to catch a gang member who is with a woman, after the guy ducks out the window, Mortimer apologizes to the woman (who is in the bath) with a slight smile and heads off to grab his bounty. 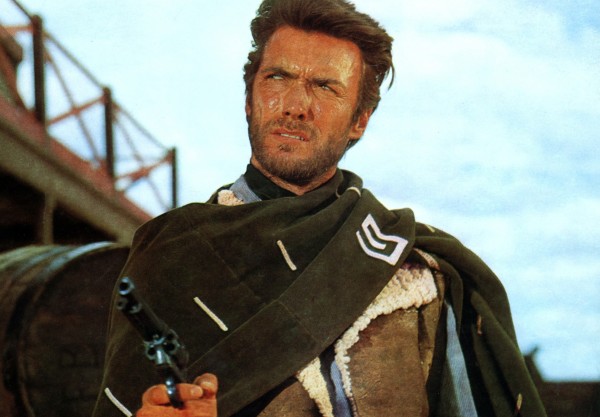 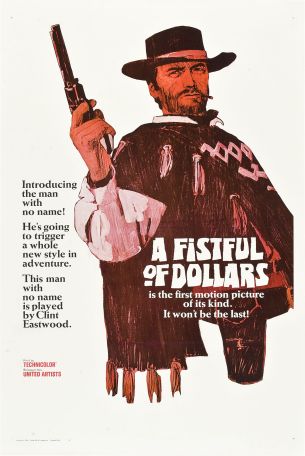 A quiet drifter gets caught up in the local politics between two families of the town of San Miguel.   Playing both sides, he seeks to make, well, a fistful of dollars.

While Eastwood built up some fame through the late fifties, especially with Rawhide, it is really the Sergio Leone spaghetti westerns that set up his iconic persona.  1964’s Fistful of Dollars is a simple and tightly told story.

The Man With No Name is quickly established as quick in thought and action.  He confronts some local thugs demanding they apologize for laughing at his mule. We also see a subplot involving a mother and her child showing that the Man With No Name has a sense of nobility and compassion.

One of the things that stands out to me is how they play off the character as one who survives by his wits.  Even after a severe beating, he is able to find a way to escape the families and trick them to solve part of his problem, reducing his risk for the film’s finale.

The Man with No Name (in each of Leone’s trilogy he is called by different names) sets the stage for Eastwood’s western persona that was often imitated, but rarely duplicated. Eastwood displays a certain charisma right from the start here that carries the character, in spite of there being little to define him otherwise.

Simple in story and character, a Fistful of Dollars is a solid western that really (along with How the West Was Won) influenced the face of westerns as we know them today.