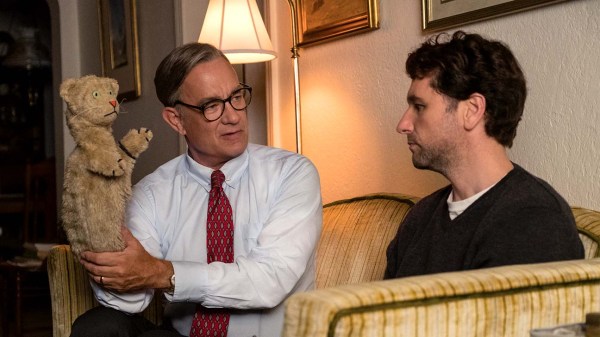 Lloyd Vogel is an investigative journalist known for exposing the truths people would rather not have exposed about themselves. He is a new father. His relationship with his own father seems damaged beyond repair. Lloyd is shocked when he is given a puff piece by his editor for Mr. Rogers in an upcoming Esquire issue dedicated to heroes.

Lloyd is caught off guard when he learns Mr. Rogers was the only person that would even consent to an interview with him. And early on, Lloyd finds himself skeptical of Mr. Rogers and especially his seemingly unending decency and kindness (this prompts his wife Andrea to ask him not to ruin her childhood with his story).

A fictional account inspired by the real life article written by Tom Junod, there is not a real Lloyd Vogel.  Junod notes that Lloyd shares a lot of his life, but they are not simply the same guy and plenty of the events are fabricated.  This realization could have worked against the film…made it seem fake. And yet, it effectively reaches for the heart strings.

This is not a film about Mister Rogers.  It is about how he impacted people that came into his orbit. Or rather those whose orbit he came into.  In spite of having no resemblance Mister Rogers, Hanks fully embodies him.  The kindness…the generosity and the love that seemed to be so much the core of him is fully embodied in Hanks’ performance.

Director Marielle Heller and writers Micah Fizterman-Blue and Noah Harpster frame the story as an episode of Mister Roger’s Neighborhood, which, for those who grew up with the show instantly bring back those childhood memories. The visual transitions of the film are beautiful model creations inspired by the models from the introduction of the old show, and they even use the 4×3 screen format. This is a brilliant bit that helps the film stand out.

The is a childlike innocence to the score by Nate Heller that works beautifully.

The one critique I have of the film, as it really does not give Lloyd the  proper recognition that he is justified in his resistance to his father’s attempts to come back into his life. His father was terrible, but the film almost feels like it believes Lloyd is wrong to refuse to connect back with his father.  I am not saying that the film following a redemptive path is bad or wrong.  But Lloyd’s feelings and anger are fully justified.

However, I still feel a Beautiful Day in the Neighborhood is a powerful and worthwhile film.  It overcomes it’s flaw with heart and soul in it’s performances.