After the disappointment of My Soul to Take, Craven returned to the grounds of his second most popular Franchise. Or is it the first? I supposed I could look at the box office.

Picking up ten years after the third film, Sydney has written a book about overcoming the events of the prior films. Her book tour brings her back to Woodsboro, bringing (now) Sheriff Dewey and Gale (now married). Gale is struggling to write a fiction book. Dewey is trying to run the police department. His Deputy Judy has a clear crush on him, His other deputies are a bit inept. We also meet a new group of teens, centered around Sydney’s cousin Jill. She and her friends suddenly find themselves facing the Ghostface killer again. Who is it now? What are the motives? Is this Sydney’s fault?

Truth be told? This is a real comeback for the franchise. It is fun to be back in the presence of Sydney, Dewey and Gale. And after the second and third films began with Dewey and Gale split up, it is nice to see them together and not really angry with each other. Their only conflict occurs when Dewey suggests Gale should not be a part of the investigation.

I really like the new additions to the cast, especially Hayden Panettiere’s Kirby and Deputy Judy played by Marley Shelton. The twists and motives for Ghostface in this film work so much better than the third film.

Honestly, one of the things that makes this franchise so great and re-watchable is it’s focus. Scream is the rare franchise that is not about its killer. Since Ghostface changes in every movie, the series is about the people Ghostface is a threat to. And we get to see arcs for our leads.

One of the things that really helps here, I suspect, is that this installment features the return of Kevin Williamson as writer, Williamson was the writer of the three good flicks in the series. He and Wes had a real magic with this series. And so, Craven’s filmography ends of a pretty high note, which is nice since he passed away four years later.

I am not sure how I feel about Scream 5…I mean, the core cast (and Deputy Judy) are coming back. But Williamson is not the writer and Craven, obviously, won’t be back. Maybe fresh writers and directors will bring something new. But I do have to say, Scream 4 is a great send off for Craven and a terrific new entry in the series.

Unlike Scream 2, this follow up took three years. And was it worth the wait?

Set a few years after the second film, Sydney lives in a remote location and is employed as a crisis hotline worker. But when murders start occurring the set of the latest Stab film (the movie series within the series based on the events of the series), Gail, Dewey and Sydney find themselves pulled into the plot of a possible trilogy.

Bringing everyone together for this one is a bit more convoluted. Dewey has been hired by the actress playing Gale (Parker Posey who is terrific and plays off against Cox really well). Gale is there to investigate after the killing of Cotton Weary. And Sydney is there… because? Like I said…convoluted. And while the film makes an effort to be clever…it just feels tired.

The twists and reveals are downright tortured as the film reveals a mastermind who was behind the other two films.

While there are some fun things in the film, and it is not unbearable…you can tell this was not written by Kevin Williamson who was too busy with Dawson’s Creek to return. And so only hal;f the magic is there. Craven does what he can, but Scream 3 feels like a true stumble for the franchise, especially for one to end on.

Scream was a massive success, and a sequel was green-lit and put out right away. Like, barely a year later. And for a lot of horror films, that can be a bad sign. So is Scream 2 a rush to cash in on success?

Picking up one year after the first film, Sydney is at college trying to make a new life. The past keeps haunting her though. The exonerated Cotton Weary (accused of killing Sydney’s mother) is insisting on Sydney participating in an interview with Gail Weathers. But the killings begin again, this time on the campus. Conveniently, Sydney and Randy decided to go to the same college, so Randy can explain the rules of a slasher sequel. THERE ARE RULES, PEOPLE.

Deputy Dewey shows up so that we can have some romantic conflict with he and Gail and the four survivors can investigate the killings on campus.

Scream 2 is written by Williamson and directed by Craven…and this is more of a case of striking while the iron is hot. The return of Campbell, Cox, Arquette and Kennedy makes for a lot of fun. They all have a real chemistry together. The new additions are a cast of solid talent… even in smaller roles (Timothy Olyfant and Liev Schreiber are guys who can carry films as leads).

The writing does not cheat, even the repeating of incidents from the first film are deliberate call backs. Craven’s direction is on still strong. Scream 2 is one of those rare sequels that feels like it compares to the original favorably. It is clear that Williamson and Craven had a vision for a continuation of Sydney’s story. And I think what helps here is that Scream is not about its killer. It is about Sydney Prescott and her friends. This makes Scream 2 an admirable follow up. 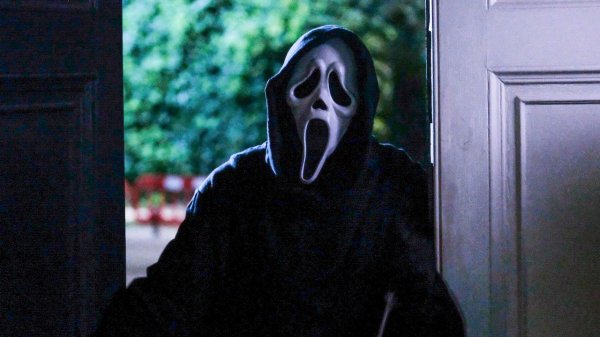 The slasher ruled the late seventies and well into the eighties. But in the early nineties, the slasher was looking to be dead. And then came the future creator of Dawson’s Creek.

An ambitious writer, Kevin Williamson arrive in L.A. in 1990…/and then saw no success for a few years…his first script sold, only to not get made until after Williamson’s script for Scream fell into the hands of Mirimax and Wes Craven.

Scream is the story of a small town beset by gory murders of local teens. Our central antagonist is Sydney Prescott. A year before the murders, her mother was brutally killed by her lover. Sydney has tried to come to terms with the tragic loss through her friendships. Her boyfriend Billy straddles the line of supportive and selfish as he really wants to have sex with Syd, while she is rather hesitant. But after the first murder, it seems the killer is not content with the act of murder alone. No, the killer is playing a cruel game.

Testing his victims with horror movie trivia, teasing them with the notion of survival if they can just answer the questions right. In a way, the killer (nicknamed Ghostface) is your typical gatekeeping Internet troll.

The killer seems focused on Sydney, and after a failed attack on Sydney, the cops focus on protecting her along with the crime. There is a lot of stuff going on in Scream and a big cast. So trying to recount the plot seems pointless.

Just know that Scream really delivers the goods. Williamson has crafted a solid script full both great scares and the humor that his scripts became known for. The kids have defined personalities that separate them from each other. And you tend to like them.

The cast is really quite good. Campbell proved she could carry a movie, Courteny Cox showed range beyond Monica on Friends and David Arquette was a lovable deputy that was supposed to die by fan love saved him.

Skeet Ulrich was one of those guys who looked like someone else (he and Johnny Depp could play brothers in a film) but also had a certain draw. The stand outs are Matthew Lillard and Jamie Kennedy. Sadly, this series is the only place where Kennedy shined. Lillard just turns the insanity up throughout this film and is a real goofy joy to watch chew the scenery.

This is a nice comeback for Craven on the heels of Vampire in Brooklyn. His direction keeps a consistent tone throughout. The satire never comes into conflict with the horror. And when Craven builds the tension, it is effective without being oppressive.

Scream is a fun and exciting thriller. And almost 25 years later? It is just as effective. I mean, I know the twists, yet, I still had a great time watching this year. Craven and Williamson proved a solid team with this film and it is one of my favorite slasher films.